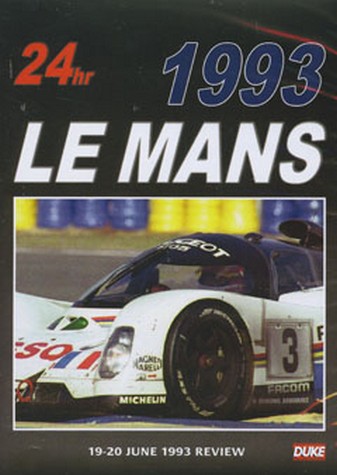 by Duke Code: 20644 Format: DVD / 60 mins Publication date: 01/06/2009 Availability: Sold Out Price: AU $29.95
Duke Video's Notes: The greatest endurance race in the world is the ultimate mix of high-speed action, drama and skill and the 1993 running of the Le Mans 24 hours race was no exception. Now you can experience all the highlights of this extraordinary event on DVD in Le Mans 1993. Incredible footage brings you the full story of more than 3,000 miles of racing at the classic Circuit de la Sarthe as the Peugeots and Toyotas battled with each other. It was a close fought race, and a memorable one as the French Peugeots took first, second and third on home soil - and with five out of nine drivers from France as well. This DVD captures all the action and atmosphere of this historic event. Among the major motorsport names which competed at the 1993 Le Mans were greats like Derek Bell, Bob Wollek, Eddie Irvine, Geoff Brabham, Thierry Boutsen and many, many more. In addition to the race action, this review brings viewers all the colour and atmosphere that surrounds this amazing event. This title is part of the collectable series of DVD reviews of the Le Mans races of the 1980s and '90s. Anticipated release date in the UK is June 8, 2009
Format: DVD
Availability: Sold Out
Publisher: DUKE MARKETING
Publication date: 01/06/2009
Country of publication: UNITED KINGDOM
Weight: 88 g
Dimensions: 0mm X 0mm
Code: 20644