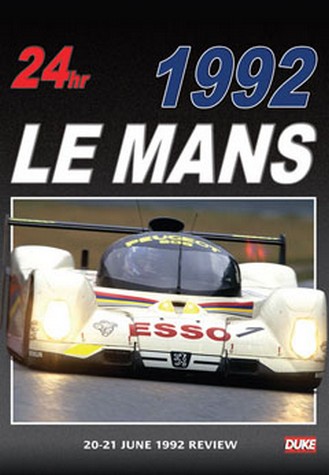 by Duke Code: 23442 Format: DVD / 90 mins Publication date: 01/07/2010 Availability: Sold Out Price: AU $25.95
Duke Video's Notes: The greatest endurance race in the world is the ultimate mix of high-speed action, drama and skill and the 1992 running of the Le Mans 24 hours race was no exception. Now you can experience all the highlights of this extraordinary event on DVD in Le Mans 1992. Incredible footage brings you the full story of almost 3,000 miles of racing at the classic Circuit de la Sarthe as the Toyotas, Peugeots, Mazdas and Porsches battled with each other. New rules meant a new look to the cars roaring around the Le Mans track, but the incredible drama was just as compelling, with average speeds topping 120mph - and this DVD captures all the action and atmosphere of this historic event. Among the major motorsport names which competed at the 1992 Le Mans were the legendary Derek Bell and many who would make their name in Formula One, including Derek Warwick, Mark Blundell, Johnny Herbert and Eddie Irvine. In addition to the race action, this review brings viewers all the colour and atmosphere that surrounds this amazing event. This title is part of the collectable series of DVD reviews of the Le Mans races of the 1980s and '90s.
Format: DVD
Availability: Sold Out
Publisher: DUKE MARKETING
Publication date: 01/07/2010
Country of publication: UNITED KINGDOM
Weight: 86 g
Dimensions: 0mm X 0mm
Code: 23442