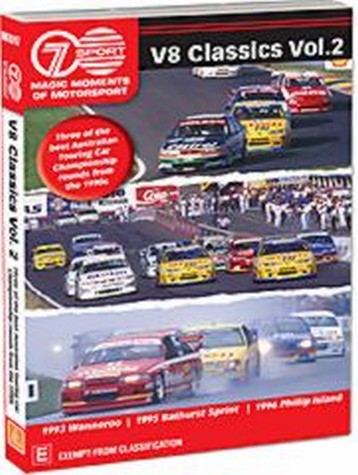 by Chevron Code: 37299 Format: DVD / 240 mins Publication date: 15/09/2015 Availability: Available. Usually dispatched 1-3 business days Price: AU $34.95
The introduction of V8 five-litre rules in Australian touring car racing in the early 1990s lit a fire that saw big crowds flock back to attend tracks all over the country to see the classic Holden versus Ford fight. The Seven Network was a crucial element in the creation of the V8 rules and regulations and telecast this golden era of motorsport in this country. On this special release we take in three rounds of the championship from this era. First up is the 1993 round from Wanneroo in Western Australia as wet weather turned the circuit into a skating rink. Through it all came Jim Richards, the ‘rainmeister’ leaving the field in his spray. Next up is the 1995 Bathurst sprint round, a return of the ATCC to Mount Panorama for the first time in just over two decades. This was a highly-competitive round claimed by John Bowe, though not before teammate Dick Johnson found himself spinning at high speed – all while talking to the commentators during an in-car camera cross! Finally we head to Phillip Island for the fifth round of the 1996 ATCC. V8 rookie sensation Craig Lowndes was making big waves in his first year with the Holden Racing Team but both he and John Bowe were lucky to emerge from a massive accident. Three different drivers claimed the race wins with Larry Perkins coming out on top to claim round honours. This title is a must for fans of Australian touring car racing with a love of close V8 racing action.
Format: DVD
Availability: Available. Usually dispatched 1-3 business days
Publisher: CHEVRON MARKETING SERVICES
Publication date: 15/09/2015
Country of publication: AUSTRALIA
Weight: 180 g
Dimensions: 150mm X 150mm
Code: 37299