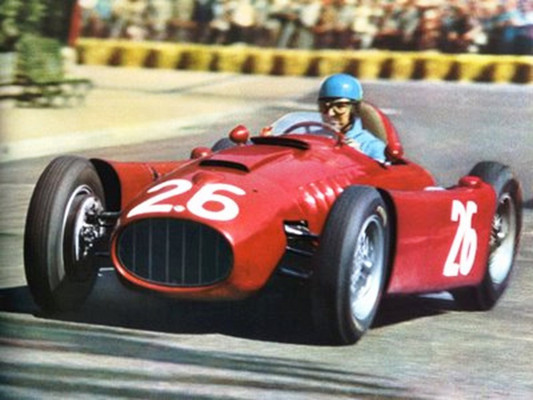 After a disappointing debut at the Spain GP in October 1954, the unlucky Alberto Ascari and his team director Gianni Lancia eagerly awaited the 1955 World Championship season. They were keen on achieving a lot more this year. Following the race in Argentina, where they didn’t get to celebrate, came the first important test of the European GP races in Monaco on May 22, 1955.

Predicted by many as the favorite winner, Alberto Ascari drove a courageous and brilliant race. Having surpassed the Mercedes W 196 cars in the heat of race, he was in the leading position. All of a sudden, however, his D50 hit the curb of a chicane and tumbled into the harbor waters. Ascari was able to free himself from the sinking vehicle and swam ashore with a broken nasal bone. Gone was the dream of an almost sure victory.

Just four days later, the worldwide racing community received the shocking news about the death of this charming racecar driver Alberto Ascari. He was killed in an accident while doing a private test run in a Ferrari for a friend.