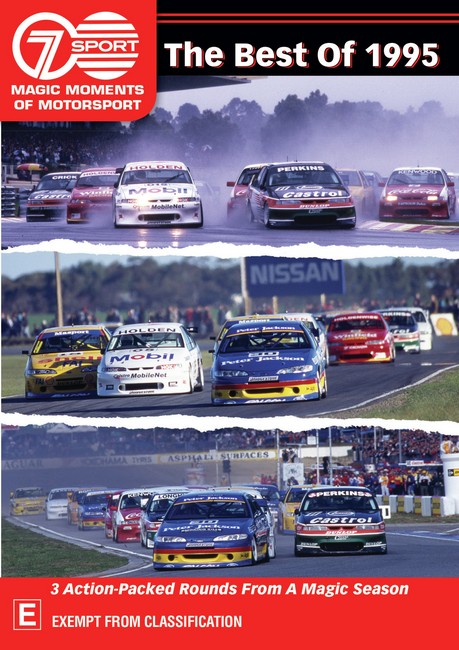 THE 1995 Australian Touring Car Championship was a classic Ford versus Holden V8 battle and, on this special Seven Sport’s Magic Moments of Motorsport DVD release, we take a look back at some of the best races from that year’s title fight.

We’ve collected three stand-out rounds of the 1995 ATCC as the V8 stars slam panels, trade paint and get stuck right into one another!

The first round is the Sandown season-opener that marked the championship debut of the new model VR Commodore and EF Falcon. Wet weather couldn’t damper the enthusiasm of the fans as Larry Perkins claimed just his second-ever ATCC round win after a titanic tussle with Shell ace John Bowe.

Then we take in the Round 8 of the ’95 title chase at Mallala in South Australia. Reigning champion Glenn Seton was coming home with a wet sail in the latter part of the series and his Falcon was the class of the field – but watch for a huge fightback drive from Holden hero Peter Brock!

To round out this release we have also included Round 9 at Barbagallo Raceway in Western Australia. The championship was up for grabs and tensions were high with eventual champion Bowe right in the thick of the action as Seton and Brock tried to claw back vital points on the title-leading Shell-FAI Ford!

As an added bonus we’ve included – where possible - all of the action filmed during the commercial breaks of the period, so you don’t miss a second of these important races from Australian touring car history!

This DVD is a must-have for your collection of Seven Sport Magic Moments of Motorsport titles, celebrating the classic Ford versus Holden battles that have underpinned Australian motorsport history.