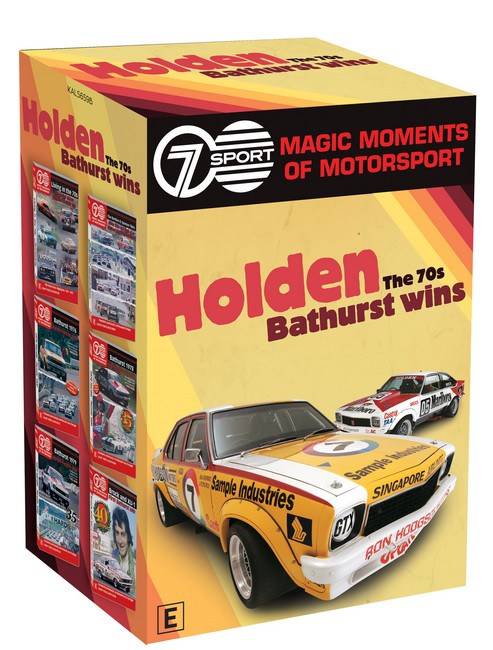 The 1970s was an amazing time for Holden – and an even better one if you loved motorsport.

It was a decade where Holden ruled Bathurst in the annual October classic with 5 race wins and a new superstar was born with his first Bathurst win in1972.

This very special box set looks at the Holden victories in the 70s a period of immense changes in the race with an expansion in distance, a change to colour TV and many say this was the ‘golden era’ of Bathurst Racing with showroom favourites modified for racing putting all on the line for victory.

On this six DVD set we look at the early period where Bathurst became big featuring highlights of the race from 1970 to 1975. Then we take a look at rarities and sponsor films featuring gems from the vaults of a brilliant period of Bathurst, the films and the quality aren’t 100% but they are gems that need to be seen. Then we have stand-alone wins being1976 with almost the complete telecast just over 5 hours then the complete telecasts of the race in 1978 and 1979. As a special bonus we have included Brock and XU-1 40 year anniversary DVD.

Holden and its mighty Torana ruled the mountain and paved the way for all those that followed.

LITS1 Living In The Seventies

LITS2 The Rarities and Sponsor Films