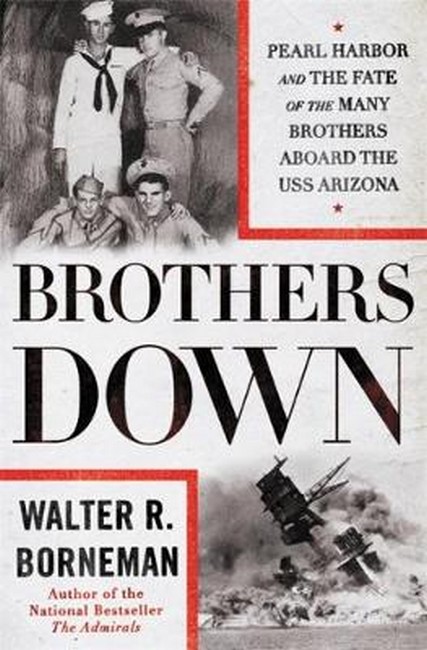 Pearl Harbor and the Fate of the Many Brothers Aboard the USS Arizona by Borneman, Walter R. Code: 56082 Format: Hardback / 416 pages Publication date: 14/07/2019 Availability: In Stock. Usually dispatched same business day from Sydney, Australia Price: AU $45.00
The surprise attack at Pearl Harbor on December 7, 1941 remains one of the most traumatic events in American history, destroying a naval fleet, killing over a thousand crew members, and launching the United States into World War II. While Pearl Harbor catapulted a nation into battle, it also shattered military families. In the week leading up to and including Pearl Harbor, 79 blood relatives served aboard the USS Arizona. Not only were sons sent to serve on the ship, but fathers and sons together, brothers and brothers. Some families sent as many as three. On that fateful day, 63 brothers were killed. In BROTHERS DOWN, acclaimed historian Walter R. Borneman returns to the critical week of December 7 through the eyes of these families. A deeply heroic story of sacrifice and leadership, Borneman traces the lives of these men, their relationships, and their fateful experience on the USS Arizona. More than just an account of familial bonds, everlasting patriotism, and national heartbreak, BROTHERS DOWN captures the turning point in American military history.
Format: Hardback
Pages: 416
Availability: In Stock. Usually dispatched same business day from Sydney, Australia
Publisher: LITTLE, BROWN
Publication date: 14/07/2019
Country of publication: UNITED STATES
Weight: 680 g
Dimensions: 235mm X 152mm
Code: 56082