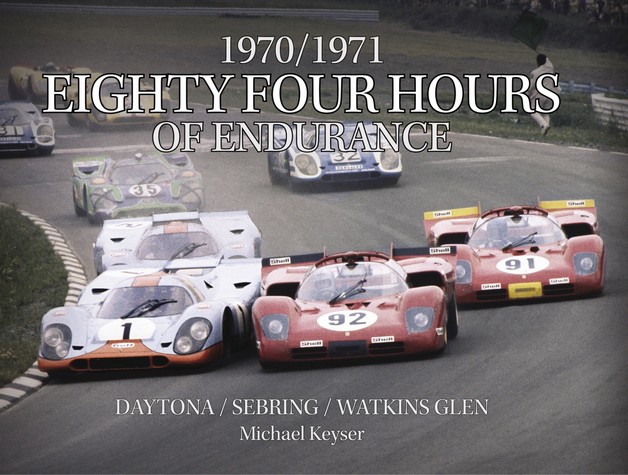 by Michael Keyser Code: 36061 Format: Hardback Publication date: 01/11/2014 Availability: Sold Out Price: AU $149.99
In 1969, two of the most famous sports car manufacturers in the world, one German and one Italian, built what even today are considered the epitome of what a race car should be. The ensuing fight between the Porsche 917 and the Ferrari 512 S, driven to the limit by some of the sport’s greatest stars, has forever been regarded as a special two years in sports car racing, captivating a global audience and providing the storyline for Le Mans, an epic Hollywood film. The legendary Porsche vs. Ferrari duel started at the Daytona International Speedway in January 1970, and although the battle lasted less than two years, ending at Watkins Glen in the summer of 1971, it left a trail of memories in its smoky wake. EIGHTY FOUR HOURS OF ENDURANCE captures many of those memories in a richly illustrated book that bundles together the six American rounds of the FIA World Championship for Makes in 1970 and 1971. Daytona, Sebring and Watkins Glen. 24, 12 and 6 hours in length. Times two. Featuring 520 photographs, 230 black & white and 290 color, and supplemented by detailed race reports, results and maps, you’re taken onto the high banks at Daytona, down the concrete runways of Sebring and around the short, fast Watkins Glen circuit in upstate New York. The drivers included on the 244 pages of the book are a veritable who’s who of 1970s motor racing—Andretti, Ickx, Redman, Siffert, Rodriguez, Elford, Gurney, Larrousse, Cevert, Oliver, Posey, Beltoise, to name a few. EIGHTY FOUR HOURS OF ENDURANCE takes you back to the grid, onto the track, into the pits, around the paddock and behind the scenes for a memorable ride through time.
Format: Hardback
Availability: Sold Out
Publisher:
Publication date: 01/11/2014
Country of publication: AUSTRALIA
Weight: 1400 g
Dimensions: 150mm X 150mm
Code: 36061