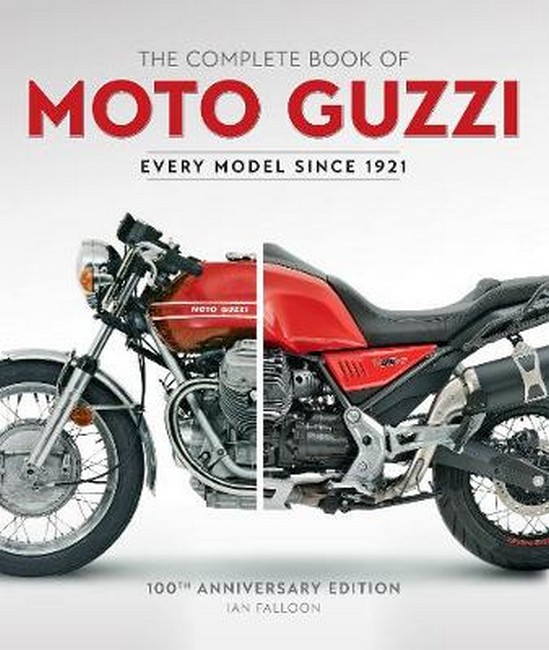 The Complete Book of Moto Guzzi

The Complete Book of Moto Guzzi: 100th Anniversary Edition, Every Model Since 1921, written by respected motorcycle expert Ian Falloon, offers enthusiasts a thorough review of Guzzis storied 100-year history via all of its production models. The oldest European motorcycle manufacturer in continuous production, Italys Moto Guzzi has built some of the most iconic motorcycles ever produced. Established in 1921, the company is one of the most traditional motorcycle makers and also one of the most innovative. Carlo Guzzis first engine design, a horizontal single, defined Moto Guzzis road-going motorcycles for the companys first 45 years. In the 1950s, Moto Guzzi experienced tremendous success in Grand Prix motorcycle racing. Today, Moto Guzzi has a higher profile than ever, thanks to its popularity among enthusiast celebrities like Ewan McGregor. This new edition of The Complete Book of Moto Guzzi includes a 100th anniversary introduction, new photography, and additional pages to cover the newest models from 2018 to 2020. All of Moto Guzzis production models are covered in detail, including the groundbreaking Falcone, the V-8 Grand Prix racers, the V7 Sport, the Ambassador, the Eldorado, the Le Mans, the Daytona, right up to todays the complete range of modern bikes including the V7, Griso, Stelvio, and V9. Celebrate a century of iconic Moto Guzzi machines, model by stunning model.

Ian Falloon was born in New Zealand and studied engineering and music at Victoria University, Wellington. After a motorcycle accident brought an end to his career as a symphony orchestra oboist, he began writing articles about motorcycles for magazines including Classic Bike, Cycle World, Motorcyclist, Two Wheels, Motorcycle Sport, and Australian Motorcycle News. His first book, The Ducati Story, has run to several editions and has been published in three languages. The success of The Ducati Story led to a series of Ducati books and histories of Honda, Kawasaki, BMW, and Moto Guzzi motorcycles including Motorbooks titles The Complete Book of Ducati, The Complete Book of Moto Guzzi, The Complete Book of Triumph Motorcycles, and The Art of Ducati. With an interest and passion spanning decades, Ian now concentrates on collecting and restoring older Italian motorcycles, particularly Ducati, MV Agusta, Laverda, and Moto Guzzi. He lives in Melbourne, Australia, and is ably supported in his projects by his family.