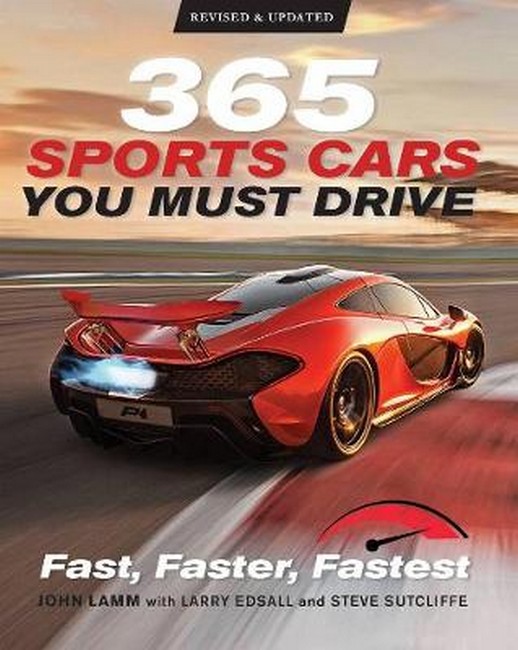 365 Sports Cars You Must Drive

365 Sports Cars You Must Drive puts you in the drivers seat of a centurys worth of sports car legends (and a few rather less legendary), each presented with a fun and informative profile and fact-and-spec box. Its the ultimate gearheads bucket list and poses the challenge: How many have you driven? Whoever coined the phrase "getting there is half the fun" must have owned a sports car. And the wag who suggested that "its the journey not the destination"? Probably driving a Lotus or MG at the time. From towering icons like Ferrari, Lamborghini, Porsche, and Corvette to everyman sportsters from Triumph, MG, Sunbeam, and Miata to oddballs like Crosley, Sabra, and DB, sports cars inspire passion and strong opinions as few other vehicles on the road can. In one beautiful book, long-time Road & Truck magazine chief photographer John Lamm, along with other top motoring contributors, gives the reader illustrated profiles of every sports car youve ever dreamed of driving! Now, imagine if you could drive a different sports car-any sports car-every single day for a year. Which would you choose?

John Lamm is a respected, long-time automotive journalist and photographer who covers sports and racing cars for Road & Track. After attending a road race at Elkhart Lake, Wisconsin, he decided to become an automotive journalist and began his career with Motor Trend magazine in Los Angeles. In 1975, he moved to Road & Track, where he remains editor-at-large to this day. Lamm has won the International Motor Press Associations Ken Purdy Award and the Motor Press Guilds Dean Batchelor Award. Steve Sutcliffe has been a car journalist for over 30 years, and is currently a contributing editor to Auto Express and its sister magazine Evo, after working as road test editor at What Car? and editor of Autocar. He is also a successful racing driver, competing in the BTCC with Lexus and for the factory team in the TVR Tuscan Challenge. He has competed in the Nurburgring 24h and finished on the podium with Aston Martin in the Silverstone 24h. He was one of the first journalists ever to be allowed to drive a current F1 car, setting highly competitive times around Silverstone in Jenson Buttons Honda RA107. Larry Edsall was snatched away from a career as the sports editor of a daily newspaper in Michigan to become the motorsports editor at AutoWeek magazine, where he spent most of a dozen years as the managing editor. He left Detroit for Phoenix in 1999 to help modernise one automotive website and then launched another, iZoom.com. He contributes to automotive and lifestyle publications, writes regularly for the Detroit News "Drive" section and the New York Times "Wheels," and is part of the adjunct faculty at the journalism school at Arizona State University. Edsalls Motorbooks titles include Camaro 2016, Corvette Stingray, and Chevrolet Volt. James Mann is a leading car and motorcycle photographer, with more than 20 years of experience shooting for publications, the motor industry, and businesses around the world. His work has appeared on the covers of more than 50 books and has provided stunning visuals for numerous magazines, including Classic and Sports Car, CAR magazine, Forza, The Sunday Times, and Automobile magazine. He was chosen to photograph the British Auto Legends stamps for the Royal Mail. His advertising clients include Aston Martin, BMW, and Toyota. Kris Palmer is a gearhead and writer whose work appears regularly in Minneapolis StarTribune automotive section and several enthusiast automotive magazines. Palmer contributed to Motorbooks highly regarded The Cobra in the Barn and authored The Fast and the Furious: The Official Car Guide. When not racing down a deadline, he logs quality garage time in the company of his modified Triumph TR6. Starting photography at the age of 14, George Williams quickly realised he could unite photography with his other major passion-cars. His automotive photography career began as an obsession for cars and morphed into a very successful career photographing them. Georges current client base includes some of the most prestigious automobile brands in the world. David Newhardt is one of the best automobile photographers working today and has provided photography for best-selling Motorbooks titles Muscle: Americas Legendary Performance Cars, Corvette: Fifty Years, Mustang: Forty Years, Mopar Muscle: Fifty Years, and Shelby Mustang: Racer for the Street.