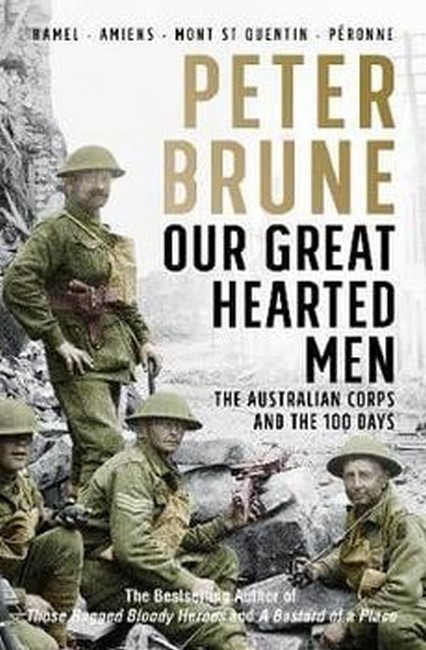 The AIF and the Hundred Days Battlefields such as Gallipoli, Fromelles, Pozières, Bullecourt and Passchendaele are burnt into the Australian Great War psyche. Unfortunately the sheer guts, fortitude and sacrifice of the diggers in those battles had often been wasted by poor leadership and planning. From an Australian perspective, such sacrifice engendered bitterness and frustration, which resulted in an emergent sense of Australian nationalism. The AIF now sought a unification of its five divisions to fight under its own command and administration.

By mid-1918, after the calamitous German March offensive in which 1200 square miles of hard-won territory had been lost, the BEF (British Expeditionary Force) had begun to learn its lessons. In just 100 action-packed days Germany was brought to its knees. And Lieutenant-General Sir John Monash and his Australian Corps played a critical role in that stunning victory.

In this authoritative account of the 100 days, Peter Brune traces the painstaking BEF acquisition of its tactical doctrine with regard to its artillery, tanks and its air force. And the consequence of this knowledge was a sophisticated inter-locking all arms approach to war: incorporating coordinated firepower rather than the futile expenditure of manpower. However, it is Brunes use of participants diaries that brings an immediacy to his story. The reader will be taken to the bloody interface of battle, hear the voices of some of the Australians involved, and gain a sense of the cost of ultimate victory.

Peter Brune is one of Australias leading military historians. He is author of the bestselling and highly acclaimed A Bastard of a Place: the Australians in Papua, as well as Those Ragged Bloody Heroes: from the Kokoda Trail to Gona Beach 1942, The Spell Broken: exploding the myth of Japanese invincibility and We Band of Brothers: a biography of Ralph Honner, soldier and statesman and is co-author with Neil McDonald of 200 Shots: Damien Parer and George Silk and the Australians at War in New Guinea. He lives in Adelaide.