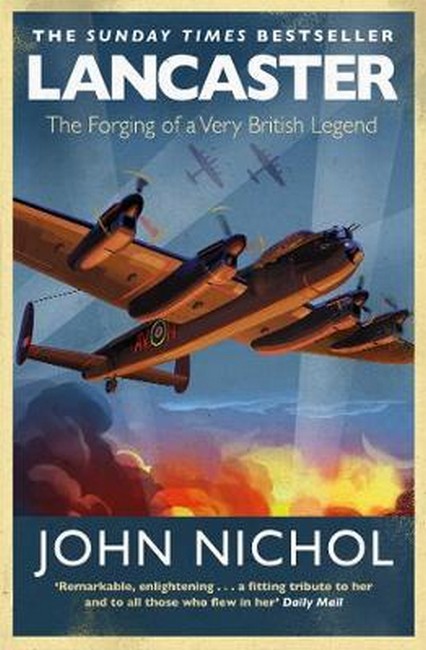 The Forging of a Very British Legend by Nichol, John Code: 60304 Format: Paperback / 464 pages Publication date: 22/08/2021 Availability: In stock at supplier. Usually dispatched 7-15 business days Price: AU $22.99
'The epic story of an iconic aircraft and the breathtaking courage of those who flew her' Andy McNab, bestselling author of Bravo Two Zero 'Compelling, thrilling and rooted in quite extraordinary human drama' James Holland, author of Normandy 44 From John Nichol, the Sunday Times bestselling author of Spitfire, comes a passionate and profoundly moving tribute to the Lancaster bomber, its heroic crews and the men and women who kept her airborne during the country's greatest hour of need. 'The Avro Lancaster is an aviation icon; revered, romanticised, loved. Without her, and the bravery of those who flew her, the freedom we enjoy today would not exist.' Sir Arthur Harris, the controversial chief of Royal Air Force Bomber Command, described the Lancaster as his 'shining sword' and the 'greatest single factor in winning the war'. RAF bomber squadrons carried out offensive operations from the first day of the Second World War until the very last, more than five and a half years later. They flew nearly 300,000 sorties and dropped around a million tons of explosives, as well as life-saving supplies. Over 10,000 of their aircraft never returned. Of the 7,377 Lancasters built during the conflict, more than half were lost to enemy action or training accidents. The human cost was staggering. Of the 125,000 men who served in Bomber Command, over 55,000 were killed and another 8,400 were wounded. Some 10,000 survived being shot down, only to become prisoners of war. In simple, brutal terms, Harris's aircrew had only a 40 per cent chance of surviving the war unscathed. Former RAF Tornado Navigator, Gulf War veteran and bestselling author John Nichol now tells the inspiring and moving story of this legendary aircraft that took the fight deep into the heart of Nazi Germany.
Format: Paperback
Pages: 464
Illustration: COLOUR SECTION(S)
Availability: In stock at supplier. Usually dispatched 7-15 business days
Publisher: SIMON & SCHUSTER LTD
Publication date: 22/08/2021
Country of publication: UNITED STATES
Weight: 320 g
Dimensions: 198.00mm X 130.00mm
Code: 60304