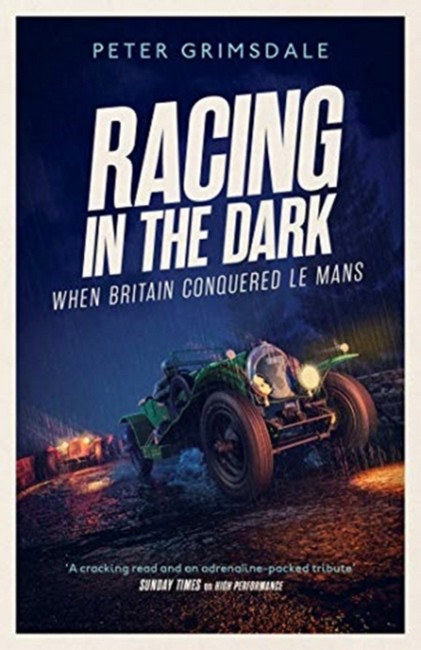 Racing in the Dark

The inspirational story of the Bentley Boys, and the Le Mans 24-hour race of 1927 that sealed their astonishing place in history.
Using the frame of that extraordinary race, in Racing in the Dark Peter Grimsdale paints a picture of a remarkable car at the historic moment when petrol overtook steam, and will explore the lives and motivations of a generation of dedicated men who were determined, above all, to blot out the enduring shadow of the First World War. Driver Sammy Davis had lost two brothers and his father in the trenches. Team owner Walter Bentley, a newlywed in the summer of 1914, had devoted himself to designing engines for Sopwith Camels, only to lose his young wife in the Spanish flu pandemic of 1918.

The Bentley Boys emerged from every level of Upstairs Downstairs Britain, from the fabled Gatsbyesque Woolf Barnato to East Ender Wally Hassan, who joined at fifteen and would one day design Jaguars Le Mans champion, to the titled grandees and spirited adventurers who became Bentleys devoted clientele. But in the heat of competition, class distinctions melted away. Bentley and his boys became almost mythical beings, alongside Mallory, Shackleton and Lawrence of Arabia, in a generation of Britons bent on filling their lives with challenge and leaving the past for dust. Bentley Motors burned brightly but all too briefly; theirs is a tale filled with drama, tragedy, determination and glory.

Peter Grimsdale is a bestselling novelist, TV producer and former commissioning editor whose credits stretch from Big Brother to Panorama, from The Adam & Joe Show to Finest Hour and Dispatches on Deepwater Horizon and Tony Blairs millions. His first motoring book was the critically acclaimed High Performance: When Britain Ruled the Roads. Old Number Seven is his second book with Simon & Schuster.