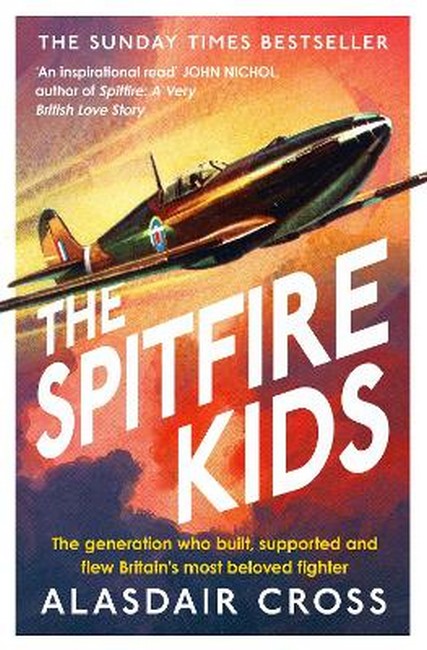 An inspirational read celebrating the incredible young people who gave so much for this iconic British aircraft. John Nichol, bestselling author of Spitfire: A Very British Love Story

Despite the many films and television programmes over the decades since the end of the Second World War that portrays our allied heroes as grown-up men and women, the Battle of Britain was in the main actually fought and won by teenagers. The average age of an RAF fighter pilot was just twenty years old. Many of the men and women who designed and built their planes were even younger.

Based on the hit BBC World Service podcast Spitfire: The Peoples Story, we use contemporary diaries and memoirs, many of them previously unpublished, to tell the story of the Spitfire through the voices of the teenagers who risked everything to design, build and fly her.

This isnt a story of stiff-upper lips, stoical moustaches and aerial heroics; its a story of love and loss, a story of young people tested to the very limits of their endurance. Young people who won a battle that turned a war.

Review: Draws on unpublished diaries and archive recordings to chronicle the extraordinary national effort to construct the fighter aircraft that gave the Allies a critical edge over the Luftwaffe. * The Times *
A truly epic account of the actual and symbolic role the plane played in defending Britain in the Second World War. * Sunday Times *
Tells the inspiring story of how ordinary citizens came together to build the famous Battle of Britain aircraft. * The Observer *
The story of how these fast and lethal little planes helped win the Second World War is stirringly told in this new BBC series. * The Mail on Sunday *
The story of the Second World Wars most famous plane is peppered with women - many of their stories untold in the decades since the conflict. * The Telegraph *
An inspirational read celebrating the incredible young people who gave so much for this iconic British aircraft. * John Nichol, bestselling author of Spitfire: A Very British Love Story *
Read Spitfire Kids and youll start believing this plane has a pulse! * Tessa Dunlop, broadcaster and bestselling author of Century Girls *
It is a story of heroism that goes beyond the spiffy moustaches and aerial acrobatics we have all seen in old movies, tapping into the verve and tenacity shown by a young workforce. * The Herald *

ALASDAIR CROSS is a successful radio and TV producer with the BBC. Brought up in the Orkney Islands, an annual summer treat was Britains smallest air show, once memorably visited by a powder pink Spitfire. He has worked on BBCs Coast and Countryfile and his radio series include BBC Radio Fours Terror Through Time with Fergal Keane and Neil Olivers Iron Curtain as well as the BBC World Service podcast Spitfire: The Peoples Plane.