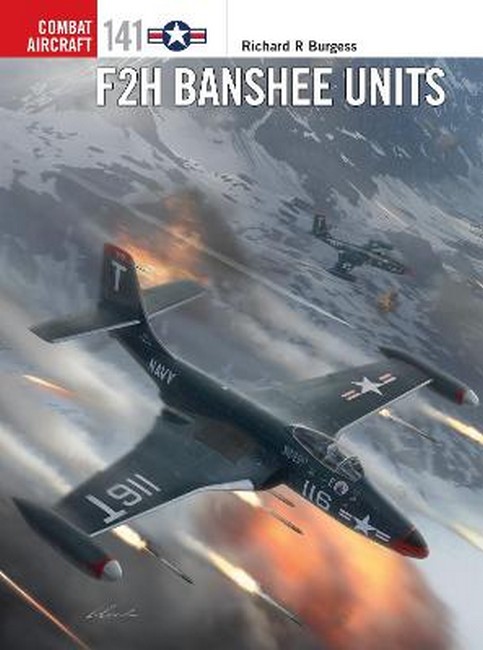 A fully illustrated study of the extraordinarily successful early-generation jet, the F2H Banshee, a frontline aircraft that served with 27 US Navy and US Marine Corps squadrons and three Royal Canadian Navy (RCN) squadrons. The F2H Banshee was an extraordinarily successful early-generation jet that outlasted both contemporary and more modern fighter types on the decks of the US Navys aircraft carriers in the 1950s. It served in a variety of roles, undertaking fighter, strike fighter, night-fighter, nuclear strike and photo-reconnaissance missions. The Banshee was a frontline aircraft for more than a decade in an era when jet fighters came and went with relatively short service careers. This book examines the entire service life of the F2H in the service of the US Navy, US Marine Corps and the RCN. Initially created as a replacement aircraft for McDonnells pioneering FH1 Phantom, the F2H served in the Korean War as a strike fighter, close air support aircraft, B29 escort, and photoreconnaissance aircraft, including the latters forays over the Soviet Union and China. Post service in Korea, the Banshee served as a carrier based nuclear strike aircraft, followed by its service as a defensive fighter for antisubmarine aircraft carriers. Filled with first-hand accounts and rare colour photographs, this is the engrossing story of the F2H Banshee, exploring its variety of roles in service and detailing the technology development that improved the aircrafts capabilities over time.

Richard R. Burgess is a retired naval flight officer who served in two patrol squadrons. He has co-authored or edited five books and magazine articles concentrating on US naval aviation. He has written two previous Osprey titles AD Skyraider Units of the Korean War (COM 114) and US Navy A-1 Skyraider Units of the Vietnam War (COM 77). Jim Laurier is a native of New England, growing up in New Hampshire and Massachusetts. He has worked on the Osprey Aviation list since 2000, and has also created the aircraft profiles for the previously mentioned books on Skyraiders in Korea and Vietnam.