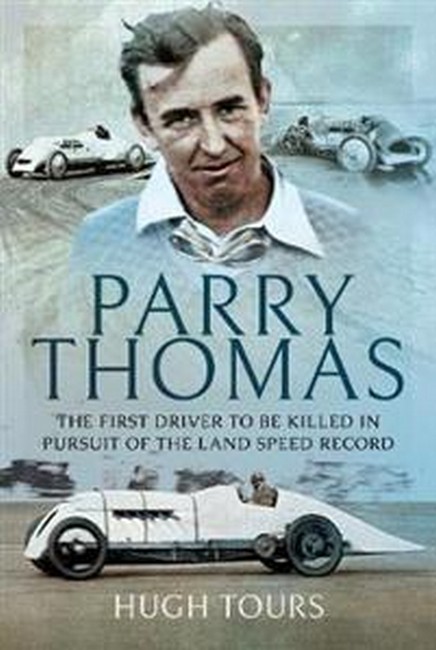 John Godfrey Parry Thomas - J.G Thomas - was by any standards an extraordinary man, in both life and in his tragic death. From a conventional upbringing as the son of the curate of Rhosddu in Wales in 1884, he became a prominent figure in the developing world of high-speed motor car racing and design. He became the chief engineer at Leyland Motors, a company whose main products were commercial vehicles. But J.G. Thomas was more interested in swifter vehicles and in 1920, along with his assistant Reid Railton, he designed the Leyland Eight, a luxury car which bristled with novel features, such as torsion springs, anti-roll bars and vacuum-assisted brakes. It was experience of driving this car around Brooklands race track that persuaded him to give up his career with Leyland to become a full-time motor-racing driver and engineer. In the Leyland Eight, Thomas achieved some success, winning thirty-eight races in five seasons and setting numerous records, including Worlds Ten Mile record at 114.84 m.p.h., and, in 1924, the Montihery Lap Record of 132.5 m.p.h. Thomas continued to develop ever-faster cars and eventually he turned his attention to the land speed record. He acquired the 27-litre Liberty-engine Higham Special and after re-modelling it and re-naming it _Babs_, on 28 April 1926 at Pendine Sands, Wales, he achieved a speed of more than 170 m.p.h., breaking Colin Campbells record by almost 20 m.p.h. The following year, Campbell re-took the record, which drove Thomas to attempt to regain his title, once again at Pendine Sands. On 3 March 1927, _Babs_ crashed, and Thomas was killed. Thomas was buried at Byfleet in Surrey and _Babs_ was interred in the dunes at Pendine Sands. This biography by Hugh Tours, includes thirty-six photographs and drawings, with an additional chapter in this new edition which details the recovery and restoration of _Babs_.

Born in Chiswick on 15 July 1910, HUGH BERTHOLD TOURS was educated at Aldenham. From early on his great interests were engineering and steam railways. A career with the Bank of England was interrupted in 1939 when Hugh enlisted in the Royal Navy as an Ordinary Seaman. He rose to the rank of Lieutenant RNVR, serving as a Gunnery Officer in the Far East as well as on the Russian Convoys - he was involved in the events surrounding Convoy PQ-17 as a member of the crew of HMS _Norfolk_. After the war ended Hugh returned to the Bank of England, where he started his literary career writing articles on cars that he tested for the Bank of England magazine. In his last few years with The Old Lady of Thread Needle Street Hugh was asked to delve into the Banks archives and to create an internal museum.