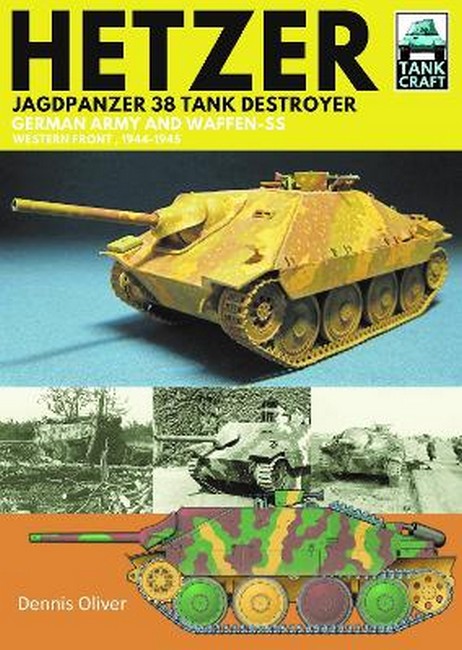 By 1944 the German army was on the defensive on all fronts and Allied bombing was putting increasing pressure on the nations industrial output. Since the earliest days of the war the Germans had experimented with mounting anti-tank weapons on obsolete chassis and one of the most successful of these would prove to be the Jagdpanzer 38, more often referred to today as the Hetzer. Small and unimposing the Hetzers appearance belied its effectiveness. Armed with the powerful 7.5cm L/48 gun, the same weapon fitted to the Jadgpanzer IV, the Hetzer featured armour sloped armour plates of up to 60mm thickness and was capable of a top speed of 42 kilometres per hour. Almost 3,000 examples were assembled and its low cost and ease of production meant that it was Germanys most important tank killer of the late war period. In his latest book in the TankCraft series Dennis Oliver uses archive photos and extensively researched color illustrations to examine the Hetzer tank destroyers and the units of the German Army and Waffen-SS that operated them during the last months of the Second World war. A key section of his book displays available model kits and aftermarket products, complemented by a gallery of beautifully constructed and painted models in various scales. Technical details as well as modifications introduced during production and in the field are also examined providing everything the modeller needs to recreate an accurate representation of these historic tanks. AUTHOR: Dennis Oliver is the author of over twenty books on Second World War armored vehicles. 200 colour and b/w illustrations