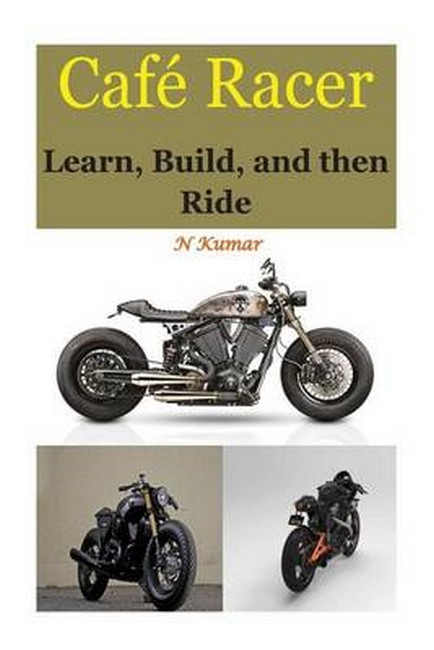 Learn, Build, and Then Ride by Kumar, N Code: 40246 Format: Paperback / 70 pages Publication date: 18/05/2016 Availability: Please contact us for availability Price: AU $24.95
Cafe Racer has two implications since it can indicate a sort of a cruiser, or a man who rides on the bicycle, the motorcyclist. The two implications go back to the 1960s in the Rockers bunch, which was an English Counterculture association. It can likewise be alluded to as the Ton up Club. The gathering was dominatingly settled in England however it was basic too in Germany, Italy and some other European countries. The Rockers were a rebellious gathering of youthful counterculture men, who were eager for velocity, and thus they needed to infer an approach to tweak motorbikes to fit the rate they needed. The particular bicycles were intended to go starting with one transport Cafe then onto the next on the blood vessel motorways that interlinked English urban areas and towns. The thought process of upgrading a standard motorbike to fit the determinations of a Cafe Racer was to achieve a velocity of 11 miles for each hour, which was alluded to as 'the ton'. The rockers would take difficulties of 'record-dashing', where a rider would ride from a Cafe to a foreordained place and back to the same Cafe before a melody could place to the end on the jukebox. A racer could for instance race from Pro Cafe that is arranged on The North Roundabout Street - NW London to the then Holder Path intersection (the these days well known Holder Path Gyratory Framework) and back to the Expert Cafe. A portion of the celebrated tunes were under two minutes in length and subsequently the racers had the test of navigating the 3 miles back and forth trip at top velocity to beat the time. The rockers were partial to rockabilly melodies, whose pictures are implanted in rockabilly culture to date. Owning a Cafe racer these days is fun since it can take you puts both truly and socially. Exemplary bicycles proprietors structure clubs that sort out get-away, races and appears. You can appreciate a visit ride with the clubs you join and you will never be shy of fun.
Format: Paperback
Pages: 70
Illustration: B&W THROUGHOUT
Availability: Please contact us for availability
Publisher: CREATESPACE
Publication date: 18/05/2016
Country of publication: UNITED STATES
Weight: 104 g
Dimensions: 229mm X 152mm
Code: 40246