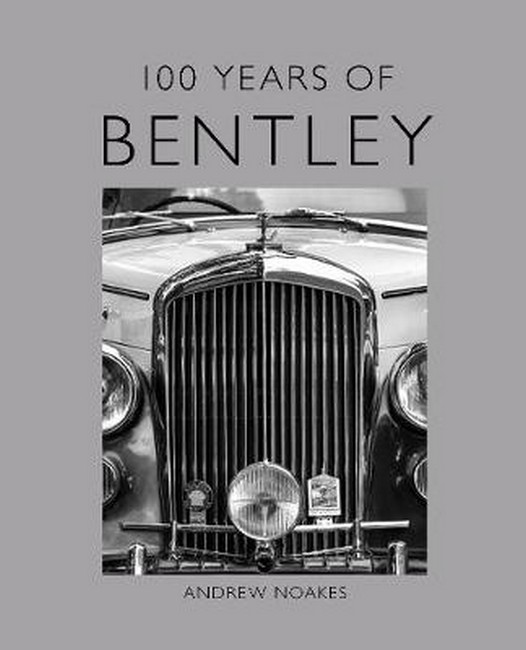 by Noakes, Andrew Code: 56410 Format: Hardback / 240 pages Publication date: 02/10/2019 Availability: Available. Usually dispatched from UK 1-2 business days Price: AU $120.00
One of the most recognised and revered car brands, Bentley celebrates its centenary in 2019. In conjunction with the Bentley Drivers Club and the W.O. Bentley Memorial Foundation, 100 Years of Bentley is a lavish celebration of the company, from its earliest models right up the modern day cars. A six-times winner in the gruelling Le Mans 24-hour race, Bentley is also the brand behind iconic cars such as the 41/2-Litre `Blower', the R-type Continental, and modern classics such as the Continental GT and Mulsanne. Featuring more than 200 pictures, many from the club's archives and some never seen in print before, this beautiful book details the whole history of Bentley. From W.O. Bentley's early days as a railway engineer along with his first attempts at modifying French DFP cars, to the company's early racing exploits, including its victories in the early Le Mans races. Covering the Bentley brand's revival in the 1980s and renewed impetus when it was acquired by the Volkswagen group, the story is brought up to date with the awesome new Bentleys built for the 21st century and the new era of electrification just around the corner.
Format: Hardback
Pages: 240
Illustration: B&W THROUGHOUT
Availability: Available. Usually dispatched from UK 1-2 business days
Publisher: AURUM
Publication date: 02/10/2019
Country of publication: UNITED KINGDOM
Weight: 2240 g
Dimensions: 305mm X 248mm
Code: 56410

CONTENTS Foreword Introduction Bentley 100 Years Timeline Chapter 1 - W.O. The founder of the company begins his career in railway engineering before joining his brother in a company selling DFP cars - which he soon modifies for greater performance. Bentley Motors Limited is formed in 1919. Chapter 2 - Glory Years Bentley builds fine 3-Litre, 41/2-Litre, 61/2-Litre and 8-Litre cars, including the famed 41/2-Litre `Blower'. Its strong, reliable racing cars win five times in the new 24-hour race at Le Mans. Diamond heir Woolf Barnato becomes Bentley's financial backer. Chapter 3 - Crisis and Rescue Following the Great Depression of 1929 Bentley struggles financially, until rescued by Rolls-Royce in November 1931. Production moves to Derby, then to Crewe after the Second World War. Chapter 4 - Going Continental Bentley introduces the new R-type saloon and then a fastback car which was to become one of its most famous - the R-type Continental. The S-type follows in three phases, but the S3 is destined to be the last Bentley with a body style not shared with Rolls-Royce until the 1980s. Chapter 5 - Badge Engineering Bentley's T-series is a Rolls-Royce Silver Shadow with different badges. There are two-door and convertible variants, but Bentleys remain rare compared to their Rolls-Royce equivalents. Chapter 6 - R for Revival Signs of revival for Bentley begin with the Mulsanne Turbo, which has no Rolls-Royce equivalent. The Turbo R accelerates the trend, offering better roadholding and handling, and there's a cut-price Eight saloon. At the other end of the scale a new Continental becomes the most expensive car on sale. Chapter 7 - From Vickers to Volkswagen Vickers, Bentley's parent company since 1980, sells Rolls-Royce/Bentley in 1998. BMW and Volkswagen vie for ownership, and eventually BMW takes over Rolls-Royce (ultimately establishing a new factory at Goodwood) while Bentley and the Crewe facility come under the ownership of Volkswagen. Chapter 8 - Back to Le Mans Bentley returns to racing with the EXP Speed 8 designed and built by Racing Technology Norfolk in Hingham. On its third attempt in 2003 it wins the Le Mans 24-hour race with a car driven by Tom Kristensen, Dindo Capello and Guy Smith. Chapter 9 - Building the Bentley Brand Bentley introduces a new model line, the Continental GT, powered by a W12 engine, which establishes Bentley as a major player in the luxury car market. A Flying Spur saloon, a GT3 racing car and a new V8 engine follow. Chapter 10 - Onwards and Upwards Bentley diversifies with a new flagship saloon, the Mulsanne, and the controversial Bentayga SUV, alongside a new-generation Continental GT. Electrification begins with a plug-in hybrid Bentayga, with big plans for the future. Model Specifications Index