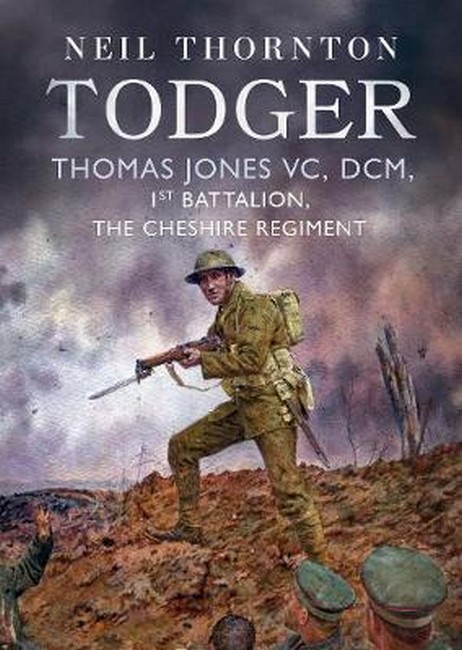 Thomas Jones VC, DCM, 1st Battalion, The Cheshire Regiment by Thornton, Neil Code: 59417 Format: Hardback / 194 pages Publication date: 16/10/2020 Availability: Future Publication. Pre-order now. Due date: October 2020 Price: AU $55.00
Even by Victoria Cross standards, the exploits of Thomas 'Todger' Jones V.C., D.C.M., of the 1st Battalion, The Cheshire Regiment, are truly extraordinary. It was a miracle that he survived the act for which he was awarded his V.C., but remarkably, after going 'over the top' by himself, he defeated the odds and secured what is believed to be the most prisoners ever captured by a single individual in the entire war. 'Todger', as he was affectionately known, served as a private soldier for the duration of the conflict, but in that time he displayed outstanding levels of gallantry and leadership, far in excess of his rank. A quiet man unassuming man in peacetime, Todger was a force to reckon with when in battle. This book chronicles his life with an added emphasis on his wartime service in the trenches of France and Flanders. Todger was born and bred in Runcorn, Cheshire. In 2014 his commemorative statue was unveiled opposite the town's cenotaph. This book also features never seen before photographs of the statue being made.
Format: Hardback
Pages: 194
Illustration: COLOUR SECTION(S)
Availability: Future Publication. Pre-order now. Due date: October 2020
Publisher: FONTHILL
Publication date: 16/10/2020
Country of publication: UNITED KINGDOM
Weight: 452 g
Dimensions: 234mm X 156mm
Code: 59417

Foreword; Acknowledgements; Introduction; 1 Pre-War; 2 The World Goes to War; 3 Hill 60: 'One of my Hottest Trials'; 4 A Bombing Attack; 5 The Somme; 6 'I Laughed like Blazes'; 7 Heartiest Congratulations; 8 The Closest of Friends; 9 'How the Dickens did you do it Jones'?; 10 The Engagements Continue; 11 Back to the Front; 12 Return to Blighty; 13 Post War; 14 Family and Personal Life; 15 A Character Assessment; 16 Remembrance; 17 In His Own Words; Appendix I: Hugh Colvin VC; Appendix II: Todger's Siblings; Appendix III: Todger's Funeral; Endnotes; Bibliography; Index.