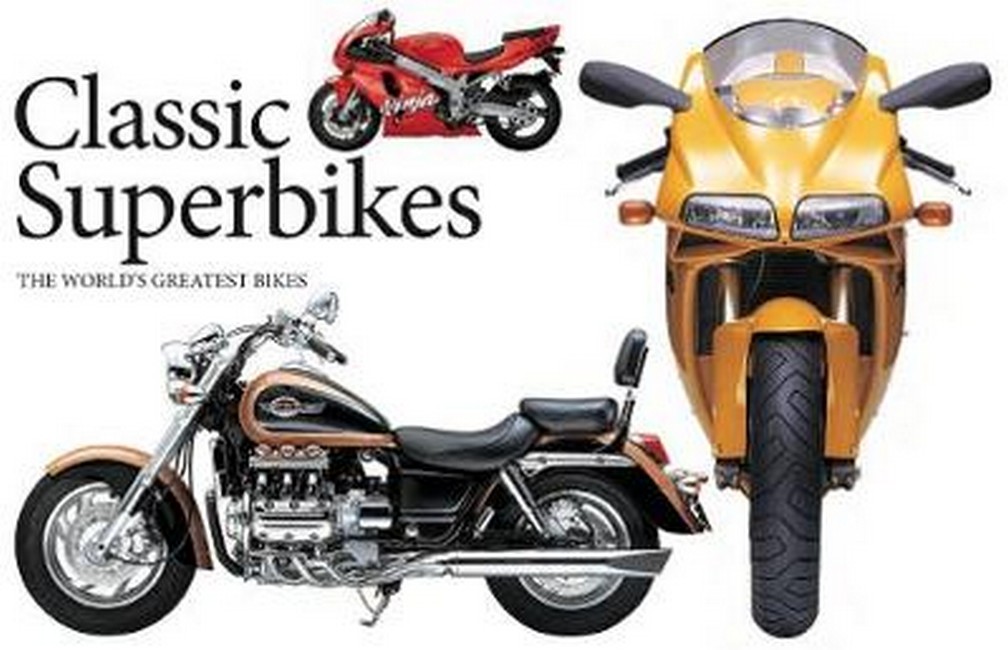 The World's Greatest Bikes by Dowds, Alan Code: 56988 Format: Paperback / 320 pages Publication date: 24/10/2019 Availability: Available. Usually dispatched from UK 1-2 business days Price: AU $19.99
Classic superbikes are at the pinnacle of two-wheeled production engineering. Designed for adrenalin-inducing speed, breath-taking handling and head-turning good looks, these superb machines are the most glamorous and desirable bikes on the road. Classic Superbikes represents a fresh and informative approach to the subject. In handy pocket-sized form it chronicles 75 of the world's greatest machines, from the earliest superbikes such as the Honda CBX 1000 and Suzuki RG500, to the Yamaha YZF R-1 and Ducati 996 SPS. Each of the 75 bikes in the book is examined in great detail over four pages. Stunning cut-out photography from a variety of angles and detailed annotations describe the motorcycle's special features, while lively text explores the history of the bike and aspects of its design. For the real enthusiast there is a comprehensive specification box containing fact and figures, from engine size and tyre measurements to top speed, weight, power output and gearbox.
Format: Paperback
Pages: 320
Illustration: B&W THROUGHOUT
Availability: Available. Usually dispatched from UK 1-2 business days
Publisher: AMBER BOOKS LTD
Publication date: 24/10/2019
Country of publication: UNITED KINGDOM
Weight: 380 g
Dimensions: 120mm X 161mm
Code: 56988

Introduction An introduction to superbikes, which started in Japan where the industry really began after World War II. APRILIA An Italian superbike, the Aprilia RS125 is one of the basic starter bikes of superbikes, and one of the most successful novice 125cc machine superbikes. BIMOTA Another Italian creation, a Bimota, called a "Tesi", was created for an engineering student's thesis idea. Other Bimota's featured include the SB8R. BMW BMW superbikes featured include the R1100S, the R1150GS, the K1200LT, and the K1200RS. BUELL Buell was started by a former Harley-Davidson engineer, and includes the Buell X1 Lightning bike. CAGIVA An Italian bike, the Cagiva Raptor is a design by the engineer who created the Ducati Monster, and is a high-performance bike, and includes Japanese efficiency alongside the Italian design. DUCATI The Ducati 748R is a smaller version of the 916 Superbike, and the R alongside Ducati superbikes explains the track-based variants of their range. Other Ducati bikes mentioned include the Ducati 851, the Ducati 900SS, the Ducati 916, the Ducati 996, and the Ducati 996SPS. HARLEY-DAVIDSON One of the most well-known motorcycle companies, and includes the Harley- Davidson Dyna Super Glide Sport. HONDA Made in Japan, Japanese licensing laws made it difficult for larger bikes to be engineered, and 400c (24ci) superbikes were the largest machines allowed, including the Honda VFR400R NC30. Other superbikes include the Honda CB400 Four Supersport, the Honda CBR600F, the Honda CB600F Hornet, the Honda CB600F S Hornet, the Honda NR750, Honda RVF750R RC45Honda XRV750 Africa Twin, and more. KAWASAKI Another Japanese based mortorcycle company, Kawasaki includes a smaller superbike, the Kawasaki ZXR400, the Kawasaki GPZ500S, the Kawasaki KH500, a cost-effective and novice bike, the Kawasaki ZX-6R Ninja, and more. KTM An Austrian based company, KTM includes the KTM Duke 620, a bike known for its dirtbike capabilities but with superbike technology. LAVERDA One of the previously most popular superbike Italian names, Laverda includes the Laverda 750S Formula. MOTO GUZZI An Italian based motorbike company, Moto Guzzi includes the Moto Guzzi California Special, an Italian brand with custom features. SUZUKI A Japanese brand, Suzuki bikes are capable of entering in racing classes. Included is the Suzuki RGV250, one of the highest specification superbikes, the Suzuki RG500, the Suzuki GSF600 Bandit, the Suzuki GSX-R600, and more. TRIUMPH The Triumph TT600 changed how Triumph was seen on the motorbike market. Other Triumph bikes included are the Triumph Thunderbird Sport, the Triumph Daytona 955i, the Triumph Speed Triple, and more. YAMAHA A Japanese brand, Yamaha includes the Yamaha FZS600 Fazer, one of the most budget friendly motorcycles available, the Yamaha YZF600 Thundercat, Yamaha YZF-R6, Yamaha YZF-R7, and more. Index