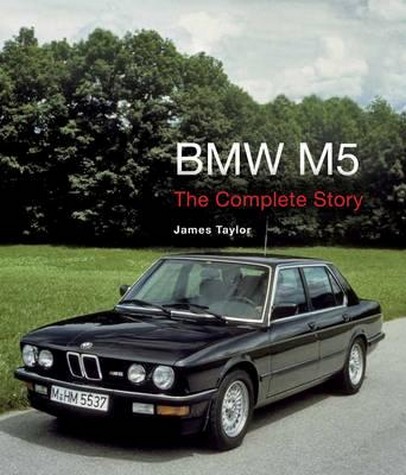 by James Taylor Code: 37444 Format: Hardback / 176 pages Publication date: 26/10/2015 Availability: Available. Usually dispatched 1-2 business days Price: AU $75.00
BMWs M5 was a simple concept: a production 5 Series saloon re-developed for high performance by the Motorsport division. The M5 was the car that really initiated the legend of the M-cars from BMW. The letter M has been applied to a high-performance BMW as early as 1978, but that years M1 was an exotic supercar. It had the right image, but the M1 was never going to bring in major profits. The M5 was much simpler in concept. It was and remains a production 5 Series saloon, redeveloped for ultra-high performance. Manufacturing costs were minimized, allowing BMW to price the car more attractively and still bring in healthy profits. This new book charts the development of the M5 across five generations. For all fans of the BMW M5, this book provides essential background. It is packed with the facts and details that make the M5 legend come alive. AUTHOR: James Taylor is a distinguished motoring historian with more than fifty books to his credit. He also writes for specialist magazines both in Britain and overseas, covering the whole motoring spectrum from classics to current models. His specialist subject might be regarded as Rover, but he has contributed several titles to the Crowood AutoClassic series on subjects as diverse as Land Rovers and BMWs. 211 colour photos
Format: Hardback
Pages: 176
Availability: Available. Usually dispatched 1-2 business days
Publisher: CROWOOD PRESS
Publication date: 26/10/2015
Country of publication: AUSTRALIA
Weight: 816 g
Dimensions: 260mm X 215mm
Code: 37444