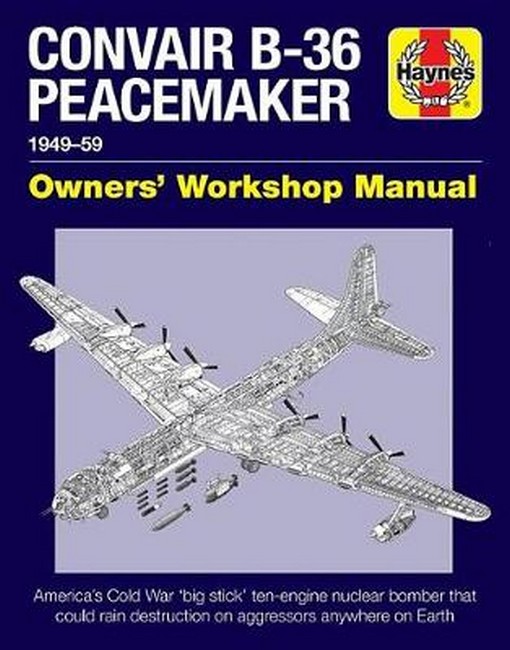 All marks and models by Baker, David Code: 56413 Format: Hardback / 224 pages Publication date: 05/11/2020 Availability: Future Publication. Pre-order now. Due date: November 2020 Price: AU $50.93
With six powerful 2,500hp Pratt & Whitney radial engines, the B-36 was the largest aircraft ever to enter volume production, joining the US Air Force in 1948 as the world's first operational bomber with hemispheric range. Two years later the type got an additional four engines, turbojets paired in pods attached to pylons outboard of the six propeller engines.At 230 ft (70.1m) it boasted the longest wingspan of any combat aircraft ever built. Thus did the ten-engine behemoth, capable of carrying five times the standard bomb load of Britain's Second World War Avro Lancaster, become the powerful tool for potential nuclear retaliation against aggressors anywhere on Earth. Ranging across Soviet skies high above the maximum altitude of Russian fighters, it threatened a reign of fire unchallenged by any other air arm in the world. The B-36 was developed further into a powerful tool for photographic reconnaissance and served as a valuable means by which the US Air Force could obtain detailed maps of areas across the Soviet Union where little was known about the exact location of towns, cities and industrial facilities - potential key targets in time of war. The B-36 scored as the most powerful delivery system in the US arsenal for waging nuclear war, only being retired when the much faster Boeing B-52 came along and when intercontinental ballistic missiles were first deployed at the end of the 1950s. The Convair B-36 Peacemaker Owners' Workshop Manual brings to the reader a highly detailed design, technical and engineering description of the aircraft, its structure and systems across the several different variants deployed with the US Air Force Strategic Air Command. Author David Baker covers the origin and evolution of the B-36, but primarily he explains how the aircraft worked, how it was operated, how it was serviced and where the various items of equipment were installed. It also provides technical details of the variants produced, including information on dimensions, weight, performance, etc, and also on the units with which the aircraft served. The text is supported by more than 300 photographs and illustrations.
Format: Hardback
Pages: 224
Availability: Future Publication. Pre-order now. Due date: November 2020
Publisher: HAYNES PUBLISHING GROUP
Publication date: 05/11/2020
Country of publication: UNITED KINGDOM
Weight: 0 g
Dimensions: 270mm X 210mm
Code: 56413