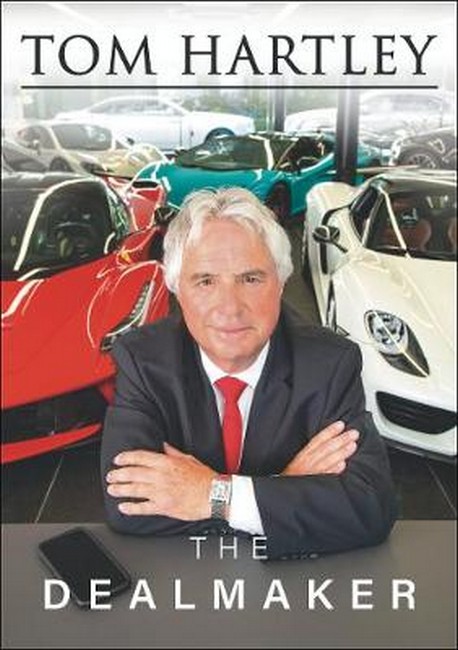 The car world is full of fascinating characters, but few have a story to tell quite as remarkable and inspirational as Tom Hartley. Walking out of school at the age of 11, unable to read or write, Hartley set up his own business buying and selling cars. From that moment on he defied logic and ripped up the rule book on his way to the top.Today, he heads one of the most successful independent family-run luxury, performance and classic car businesses in the world, and has built an unrivalled reputation as The Dealmaker. Tom has been at the top for over 40 years, survived and thrived through four recessions, and overcome three life-threatening illnesses. In his own brutally honest words Hartley tells his gripping story of a boy from a traditional Romany family who swapped the classroom for the cut-throat world of Glasgows car auctions, buying and selling his first car at the age of 12. Having decided to illegally drive himself, he was only 15 when he had his first car crash, and they dont come more spectacular than writing off a Ferrari Dino - nothing has ever been mundane in the world of Tom Hartley! Hartley had made his first million by the age of 17, but soon suffered major setbacks as his business went bust, and he found himself at risk of losing his sight without major surgery. Hartley started all over again, living with his wife in a mobile home, and working from the back of a car. He had gone from hero to zero, but his burning desire to be the best saw him climb his way back to the top. His ability to clinch deals in some of the most bizarre places has become legendary, like buying a car in a sauna, while stuck in a traffic jam on a motorway, and even in a swimming pool! Family has played a key part in the Tom Hartley story: his wife, Priscilla, has been at his side all the way, and his two sons have followed closely in their fathers footsteps. Indeed, Toms belief in family is just one of the inspiring messages that comes through in his book. Hartleys inspirational story is about his unshakeable belief in his own abilities, from a precocious schoolboy who had a dream, and then through sheer hard work and a burning desire made the dream come true. This is not just a book for car enthusiasts but for anyone who has dared to dream. Its a story that will inspire and motivate, and proves you can make the wildest dream come true if you want it badly enough ..

Contents: Chapter 1 - Swapping the classroom for the auction halls. Covering the early years as Tom walks out of school aged 11 to start his business buying and selling cars in the Glasgow Auction Halls, unable to read or write. Chapter 2 - Making my first million by the age of 17. The fast track years from schoolboy to businessman and how he made his first million by 17. Chapter 3 - From Hero to Zero. - The dramatic crash of his business literally overnight at the same time as risking losing his eyesight. Chapter 4 - Anytime, Anywhere, Anyplace. - Tells the story of Toms totally unorthodox way of doing business and the bizarre places he bought and sold cars. Chapter 5 - The Customer is King - How Tom has strived to give his customers the ultimate experience and how celebrities have played a key role in his business. Chapter 6 - Diversify and Prosper - Tom Hartley is known for his car empire, but he also has another successful business in the Park Home industry and why it is equally important. Chapter 7 - Home is where the heart is. A 40 acre estate in the heart of the English countryside is not only the base for Toms business but also where his home is. Literally showing business and pleasure can mix. Chapter 8 - Its a Family Affair - Family is everything to Tom Hartley and this chapter describes the key role they play in the business - with comments from his family on what makes Tom tick. Chapter 9 - My Mentor and Inspirations - Toms only mentor was his father Tom, but the chapter also looks at people who have inspired Tom. Chapter 10 - What the Media Say about Tom Hartley - Covers the unique relationship Tom has enjoyed with the media over his life. Also four pages of headlines from various media. Chapter 11- The Winning Formula - Tom describes his winning formula and finishes with his Top Tips on how to win at business.

Tom Hartley was born in 1961, the second child of Tom and Helen Ann Hartley - Romany travellers who sold carpets across Scotland. Toms early life as a child was spent travelling with his parents in their caravan. The family moved into their first house in the late 60s, and set up a cash and carry carpet shop in Glasgow. Tom attended Hamilton Primary School, but left school when he was 11, unable to read or write, to start selling used cars - wheeling and dealing against established dealers as a schoolboy in the cut-throat world of the Glasgow car auctions. Tom had made his first million by the age of 17, but soon ran into trouble - his business went bust and he needed an operation to save his sight. He spent the next few years rebuilding the business with his wife Priscilla, once again living in a caravan. By 1982 he was back in business, his first child was born, and the family moved into their first home in Derbyshire. Within a year he had bought 40 acres of land next to his home and started to create his business empire dealing in luxury, performance, and supercars. He hasnt looked back since, having created a family business now valued at over GBP200 million.