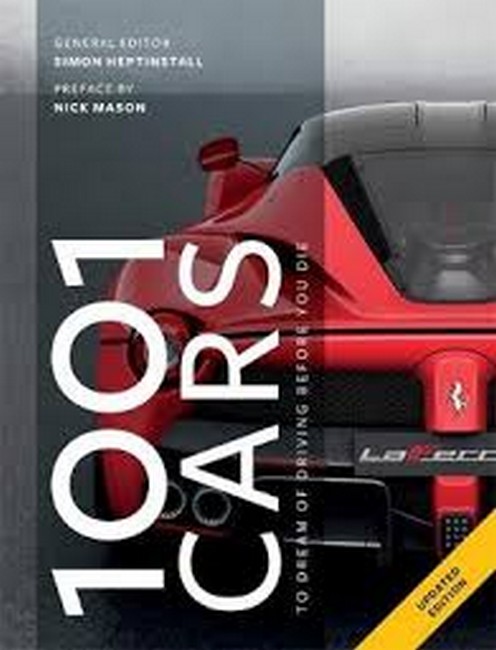 1001 Cars To Dream of Driving Before You Die

With a preface from founding member of Pink Floyd, Nick Mason. Prepare yourself for the worlds greatest road trip. Strap yourself in for a cavalcade of the fastest, biggest, smallest, most expensive, most innovative and downright sexiest motorized vehicles ever produced. Whether youre a vintage car spotter or an armchair petrolhead, 1001 Cars To Dream Of Driving Before You Die brings you the best stories and the most amazing photographs of the finest cars from every corner of the globe. This truly global guide offers a unique history of motoring through the ages, from Henry Fords pioneering Model T, with its hand-cranked starter, to the latest hi-tech vehicles, such as the Lexus LS 600h, hybrid-powered, 4x4 sports saloon, and reveals the stories behind the cars, the geniuses who designed them, the companies and factories who built them, and the people who drove them. Discover the extraordinary contraptions that started it all more than 100 years ago and drool over todays most spectacular supercars. From the most famous Ferraris and Porsches to ground-breaking sports cars from Brazil, South Africa and New Zealand, 1001 Cars To Dream of Driving Before You Die is the ultimate car enthusiasts companion. Featuring cars chosen by stars, millionaires and world leaders, from James Deans Porsche 550 Spyder and Al Capones Cadillac V16 to the classic James Bond favourite, the Aston Martin DB5, theres a car here for every petrol-head. The ultimate guide for every car fanatic.

Simon Heptinstall is a former taxi driver and garage manager who eventually switched to motor journalism. Since his career change he has helped to launch BBC Top Gear magazine and worked as a researcher for the BBCs Extreme Machines and Big Boys Toys series with Jeremy Clarkson. He has also conducted research for Autocar, AutoExpress, What Diesel and Redline magazines. He edited the Goldfish Guides to cars and commercial vehicles and worked as an editor on The Complete Book of the Car. Heptinstall has been an editorial consultant for Toyota, Peugeot, Lexus and BMW. He once set a world record for motoring madness by driving to twelve countries . . . all in one day. Nick Mason, a founding member of the band Pink Floyd, has had a lifelong passion for motor racing. Since 1973 he has competed regularly in all forms of motor sport, including five times in the 24 Hours of Le Mans race. He has authored two books: Inside Out: A Personal History Of Pink Floyd (2004) and Passion for Speed (2010), co-written with Mark Hales. He is a trustee and chairman of the advisory committee to the National Motor Museum, President of the Guild of Motoring Writers, and a Life Member and Guardian of the British Racing Drivers Club at Silverstone.