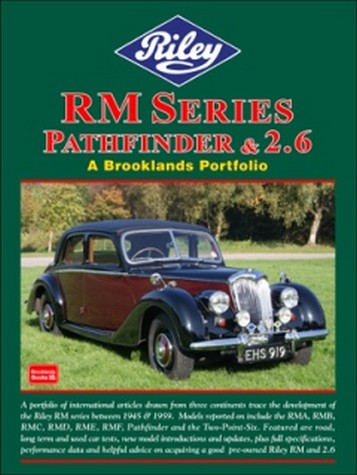 by Brooklands Books Code: 25460 Format: Paperback / 260 pages Publication date: 01/07/2011 Availability: Available. Usually dispatched 1-2 business days Price: AU $59.95
Publisher's Notes: It is difficult now to imagine the situation in 1945, when any new car was a major event for a car-hungry public, but the tenor of the motoring press's reports on the new 1.5 litre Riley announced that Autumn, made clear that this car was something really special. Its elegant styling did not offend purists by breaking with tradition; its performance lived up to that expected of the Riley name; but above all, its combination of sports-car handling with saloon-car ride comfort put it into a class quite different from most of its contemporaries. Series production got under way in 1945, and the new saloon was complemented soon after by a 2.5 litre engine model on a longer wheelbase, which immediately became one of the hottest properties around in the British motoring world. Yet despite this success, Riley could not afford to rest on their laurels. Like other manufacturers, they were under pressure to build cars for export and so to earn Britain much-needed foreign currency to help rebuild the War-shattered economy. So 1948 saw the arrival of the first left-hand-drive Rileys and of a three-seater Roadster model with the 2.5 litre engine. Sadly, though, the Roadster failed badly in the North American market for which it had been conceived, and manufacture was stopped only two years after it had begun. A similar fate befell the stylish drophead model on the 2.5 litre chassis, which was introduced later in 1948 but never sold in large quantities. The need to husband resources carefully in order to remain competitive in overseas markets led to its early disappearance and, by the middle of 1951, the Riley range was reduced once more to the two saloons. Export sales, however, were about to collapse; and the Riley's traditional styling was making it more and more of an anachronism even at home. From the Autumn of 1953, the 2.5 litre was replaced by the new Pathfinder model, and the 1.5 litre was facelifted, to continue in its revised form until the beginning of 1955. In all, 22,913 of the three Rileys were made. Latterly known as the RM Rileys, after the model-code allocated to them by the British Motor Corporation of which Riley became a part in 1952, these cars very quickly attained what is now called classic status. A club was formed for their maintenance and preservation in 1969 several years before the classic-car movement in Britain had really gathered momentum, and that club remains one of the very best classic-car clubs in the country today. Featured are road, long term and used car tests, new model introductions performance data and helpful advice on acquiring a good pre-owned Riley RM and 2.6. A total of 260 fully illustrated pages.
Format: Paperback
Pages: 260
Availability: Available. Usually dispatched 1-2 business days
Publisher: BROOKLANDS
Publication date: 01/07/2011
Country of publication: UNITED KINGDOM
Weight: 726 g
Dimensions: 1mm X 1mm
Code: 25460