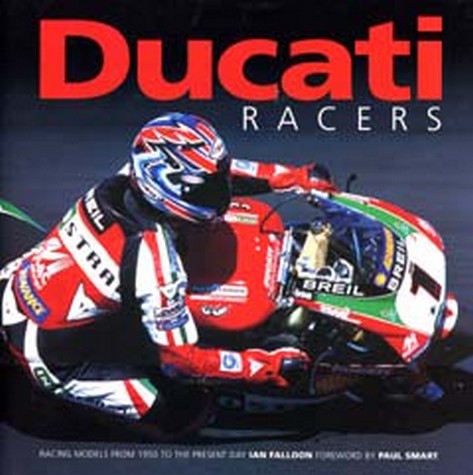 Ducati Racers - Racing Models from 1950 to the Present Day

by Ian Falloon Code: 12250 Format: Hardback / 160 pages Publication date: 01/07/2002 Availability: Sold Out Price: AU $54.95
Racing forms the lifeblood of the Ducati marque, and every significant street Ducati has been derived from a racing machine. Central to this emphasis on racing has been chief engineer Fabio Taglioni and his commitment to desmodromic valve gear. This is the full story of Ducati's involvement in road racing, from their first successful racer, the 98cc Marianna of 1955, to the four-valve V-twin world superbike machines which have dominated in world superbike racing from the late 1980s to the early 2000s, becoming the most successful of all racing Ducatis.
Format: Hardback
Pages: 160
Illustration: COLOUR THROUGHOUT
Availability: Sold Out
Publisher: BOOKMARK REMAINDERS
Publication date: 01/07/2002
Country of publication: UNITED KINGDOM
Weight: 844 g
Dimensions: 150mm X 150mm
Code: 12250

A new title in series with Kawasaki Racers. Extensively illustrated with superb colour photographs. The immediate influence on the racing programme of Fabio Taglioni, who was recuited to design a racing motorcycle for the important Girod'Italia and Milano-Taranto road races. The introduction of the desmodromic 125 which caused a sensation at Sweden in 1956. Endurance racing with modified Formula 3 racers and special 250s during the 1960s. The legendary win in the 1972 Imola 200 race for Formula 750 machines, when Ducati took on the world's jajor manufacturers and beat them. Mike Hailwood's spectacular return to the Isle of Man in 1978. The story of the four-valve racers from the first 748 in 1986 to the current 998, including the championship challenges of Carl Fogarty, Troy Corser, Pierfrancesco Chili, John Kocinski, Troy Bayliss, Ruben Xaus and Ben Bostrum.
Ian Falloon is an Australia-based freelance motorcycle journalist and photographer who contributes regularly to the motorcycle press in the UK, US and Australia. Previous books for Haynes include Ducati Super Sport, The Ducati Story, The Moto Guzzi Story, The Kawasaki Story and Kawasaki Racers.