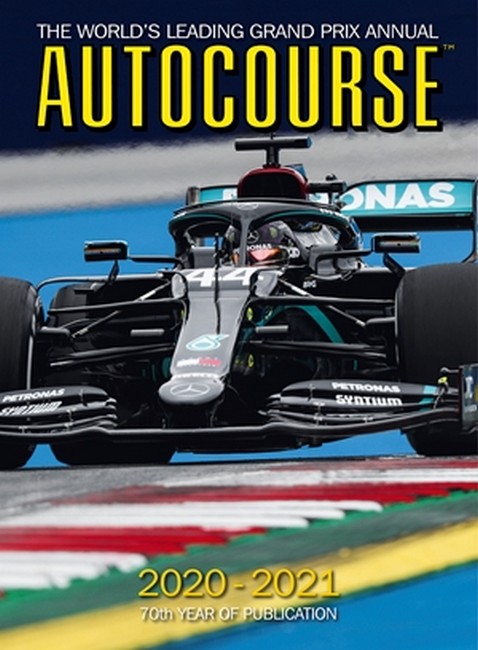 With Pandemic closing all motorsport activity in the first half of the year, The condensed schedule for the 17-race Formula 1 World Championship season is covered in its usual full depth, with hugely experienced paddock insiders Tony Dodgins and Maurice Hamilton dissecting the drama and intrigue that are intrinsic parts of any F1 season. Their race commentaries are complemented by detailed results spreads, including lap charts and tyre strategies.

Mercedes-Benz again proved the class of the field, with Lewis Hamilton, backed by the experienced Valtteri Bottas, bidding to win his seventh world championship,

Ferrari found themselves uncompetitive and Charles Leclerc, and Sebastian Vettel struggled to find the speed that made them winners in 2019, and it was left to  the ever-resourceful Red Bull Racing, with the exciting talent of Max Verstappen, to rise to the challenge and further justify their decision to switch to Honda power.

Below the top three teams, Renault at last looked like return to past glories while locked in battle with McLaren and Racing Point for fourth place in the constructors championship.

Highly respected Mark Hughes looks at the technical developments behind all the competitors in his team-by-team review, enhanced by Adrian Deans beautiful F1 car illustrations.

In addition to Formula 1, the sports other major categories are all afforded ample coverage. The Formula 2 and Formula 3 championships, key rungs on the professional single-seat ladder, are chronicled, as is the rise of Formula E, which is rapidly gaining considerable support from major manufacturers.

From the other side of the Atlantic, Gordon Kirby provides his usual insightful analysis of the US racing scene which majors on the compelling action of the ever-growing Indycar series and the gruelling NASCAR series.

AUTOCOURSE provides the most comprehensive record of the years sporting action, complete with results, published anywhere in a single volume. It is required reading for motor sport fans the world over.

Tony Dodkins is one of the worlds leading F1 journalists and attends every grand prix, reporting for a wide range of media worldwide. A passionate fan of Senna, he has been Grand Prix reporter for Autosport, F1 Racing and Motorsport News in the UK, and has written for leading motorsport titles in the USA and Japan. He also writes for and edits the prestigious Autocourse Formula 1 annual. At races he is part of BBC TVs coverage, assisting Ben Edwards and David Coulthard in the Formula 1 commentary

Maurice Hamilton has been part of the Formula One scene since 1977 and was the Observer’s motor racing correspondent for 20 years. He has written more than 20 books as well as commentating on Formula One for BBC Radio. He is now actively involved with the online community on Twitter and writes several blogs whilst continuing to write books about racing.

Mark Hughes is one of the most highly respected and authoritative writers in contemporary motorsport. He combines an acute understanding of present-day Formula One with an intuitive feel for the past. His work appears in a wide variety of magazines, including the UKs Autosport.

Gordon Kirby is one of the world’s most widely-read and respected motor racing writers. He was American editor of Autosport for thirty-two years from 1973-2004 and now serves as the US editor of Motor Sport, the world’s oldest racing magazine. Kirby also writes the annual American season review for Autocourse, starting in 1973, and is the author of an award-winning biography of Mario Andretti, A Driving Passion. Kirby also has written books about the Unser family, Bobby Rahal and Emerson Fittipaldi, and contributed to a book about Greg Moore.