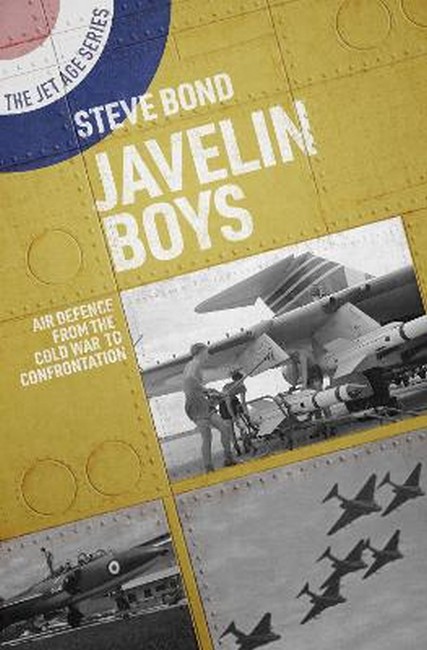 The Gloster Javelin was the UKs first line of night and all-weather air defence both at home and in RAF Germany. In the 1950s, when it replaced the Meteor and Venom, this revolutionary bomber interceptor became integral to many great stories told here in terrific detail. With an unorthodox aerodynamic design, the Javelin initially had major production issues, which included a tendency for engines to self-destruct under certain conditions. Despite this and the criticism it faced its nicknames included Flying Flat-Iron and Harmonious Dragmaster the aircraft still receives much affection from its former aircrew. Starting from the first deliveries of Javelins in 1956 until the final withdrawal from RAF squadron use in 1968, Javelin Boys describes adventures in Cyprus, Singapore during the Indonesian Confrontation and Zambia during the Rhodesian declaration of UDI. In this period a total of 434 Javelins were built, with their use spanning across eighteen different squadrons. Steve Bond has interviewed a number of veterans, all with captivating tales of their time on the aircraft. Alongside their anecdotes is a detailed history of this unusual aircraft, accompanied by photography. This book is bound to appeal to all aviation fans. AUTHOR: A life-long aviation professional and historian, Dr Steve Bond has spent over forty years working in the industry. He served in the Royal Air Force for twenty-two years as an aircraft propulsion technician, with tours on many different aircraft, and was part of the Eurofighter Typhoon project team in the MoD. Steve then spent thirteen years with City University London as a senior lecturer and course director. He developed and ran the worlds first MSc Air Safety Management programme for aviation professionals and continues to lecture on the subject. He has a PhD in Air Safety Management, is a chartered engineer and a fellow of the Royal Aeronautical Society. He is also the author of many magazine articles and books.

PRAISE FOR JAVELIN BOYS "With insightful text and an interesting array of photos, Javelin Boys is highly recommended. It both entertains and informs, a tricky balance to strike, but one achieved with aplomb here." Aeroplane (Book of the Month - December 2017) "A superb publication...the central presentation of a wide range of colour photos illuminates the whole book and indeed the story of the aircraft... An enthralling read that I thoroughly recommend." RAF Historical Society Journal "This book has it all; the derring-do, professionalism and dedication of those that flew and serviced the difficult, but ultimately successful delta design." Airfix Model World "Fascinating, funny and at times tragic anecdotes from former ground and aircrew personnel." Flypast