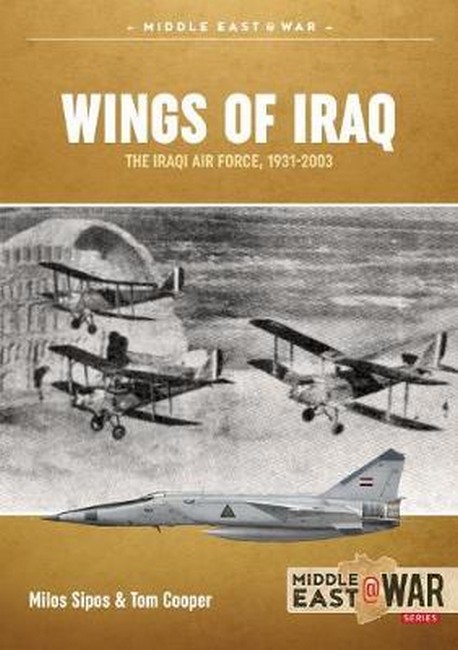 The Iraqi Air Force, 1931-2003 by Cooper, Tom Code: 59254 Format: Paperback / 88 pages Publication date: 01/11/2020 Availability: Future Publication. Pre-order now. Due date: November 2020 Price: AU $42.99
Officially established on 22 April 1931, around a core of 5 pilots and 32 aircraft mechanics, the Royal Iraqi Air Force was the first military flying service in any Arab country. Coming into being with the task of supporting the Iraqi armed forces and the British against revolts by local tribes, it saw extensive combat and gradually grew into a potent force. During the Anglo-Iraqi War of 1941, it became involved in its first conventional campaign in support of an anti-British coup but was destroyed as a fighting force. It was still recovering when deployed in combat again, this time against Israel in the course of the Palestine War of 1948-1949. During the 1950s, the Royal Iraqi Force experienced a phase of unprecedented growth: after acquiring several batches of Hawker Fury piston-engined fighter-bombers, Bristol Freighter transports and its first helicopters, it entered the jet-age through the acquisition of de Havilland Vampires and Venoms, and Hawker Hunters in quick succession. The 14 Tammuz Revolution of 1958 toppled the British-imposed monarchy and cut the ties to London. For the next five years, the Iraqi Air Force (IrAF) maintained close links to the Union of Soviet Socialist Republics and became the first Arab air force to operate types like the MiG-19 and MiG-21, and also the first equipped with Tupolev Tu-16 medium jet bombers. Through the 1960s, the IrAF played a dominant role in Iraq's inner politics, determining the fate of the nation to an unprecedented degree. It not only became involved in combat against Kurdish insurgents in the north of the country: its officers staged multiple coups d'etat in 1963, 1965 and 1966, served as Ministers of Defence and Prime Ministers of the Iraqi government, became involved in the June 1967 War with Israel, and were instrumental in the putsch of 1968 that brought the Ba'ath Party to power. Although subjected to the tight control of the Ba'ath and the Army, the IrAF continued growing through the 1970s and reached its zenith during the Iran-Iraq War of 1980-1988, when it flew some of the most advanced combat aircraft available world-wide, became the air force with most combat- and flying experience on the MiG-25 and the first true multi-role combat aircraft ever the Mirage F.1 - and played the crucial role in forcing Tehran to accept a cease-fire. In 1990, the IrAF took part in the invasion of Kuwait. Decimated during the 1991 Gulf War against the US-led coalition, it became involved in the suppression of the uprisings in northern and southern Iraq, and subsequently continued fighting a decade-long no-fly zone maintained by the USA and Great Britain. Although virtually 'born in battle', collecting precious combat experience and playing an important role in so many internal and external conflicts, the Iraqi Air Force remains one of the least known and most misinterpreted military services in the Middle East. Richly illustrated, 'Wings over Iraq' provides a uniquely compact yet comprehensive guide to its operational history, its crucial officers and aircraft, and its major operations. 100 b/w illustrations, 20 colour photographs, 4 maps, 15 colour profiles
Format: Paperback
Pages: 88
Illustration: COLOUR SECTION(S)
Availability: Future Publication. Pre-order now. Due date: November 2020
Publisher: HELION & COMPANY
Publication date: 01/11/2020
Country of publication: UNITED KINGDOM
Weight: 0 g
Dimensions: 291mm X 210mm
Code: 59254