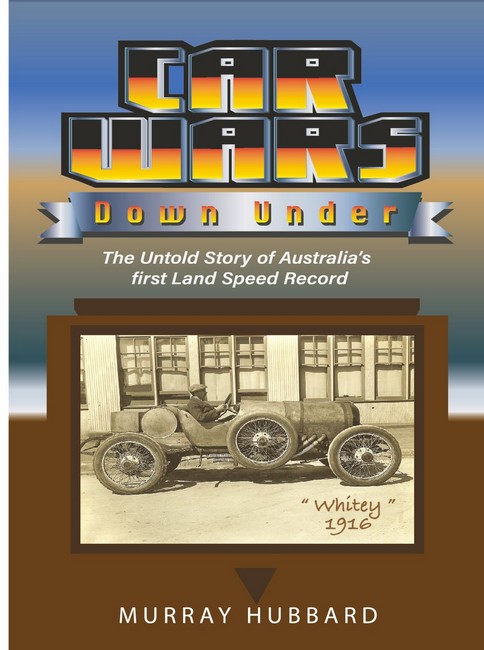 Car Wars Down Under

A rollicking ride through the early days of Australian motorsport. Set in 1900 - 1918 in Perth, Melbourne, Brisbane and the Gold Coast, the true story of bitter rivalry between two Brisbane car importers/ dealers: E.G. Eager & Son and Canada Cycle and Motor (CCM). There are four main characters; Fred Z. Eager, Alec Fraser Jewell, E.G. Eager and CCM managing director A.V.Dodwell. The paths of speedsters Fred Eager and Alec Jewell collide on Christmas Day, 1916, on Southport Beach at the first attempt to set an Australian land speed record. CCM could not beat Eager and Whitey in the premier motorsport event of hill climbs so they decided to stage an event of their own, bespoke for the Studebaker. This race would nullify Fred Eagers driving skills and suit the big-engined Studey: A straight-line land speed contest against the clock on the firm, low-tide sand of Southport (Surfers Paradise) beach. Only one of them could win. Or could they?

MURRAY HUBBARD is a journalist who has worked for 40 years in print media in Australia. He completed his cadetship at the Melbourne Sun News Pictorial in 1973 and later worked for The Age in Melbourne, the Townsville Bulletin after a sea-change, and then at the Gold Coast Sun. While at the Gold Coast Sun he was a three-time finalist for investigative reporting in the Walkley awards, was awarded the Golden Quill in the Gold Coast Media Awards and a three time winner of the Queensland Country Press award for Individual Journalistic Excellence. Murray was the Suns motoring editor from 1996 to 2008. His first book, The Search for Harold Lasseter, was published in 1993 by Angus & Robertson. He later researched with Ray Connor, and wrote the manuscript which was turned into the multi-award winning The Day of the Roses, a Ch.10 TV mini-series and Telemovie. This was an investigative doco-drama of events in Sydney that led to the January 18, 1977 Granville Rail Disaster. He lives in Brisbane with wife Shelly.