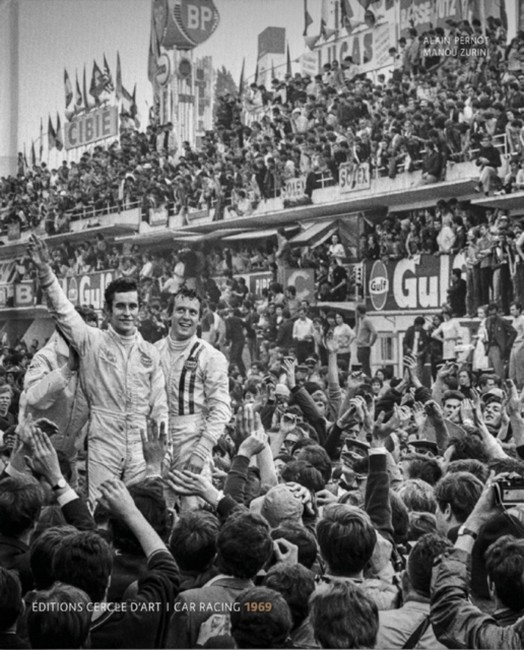 The fifth volume in the Car Racing series charts 1969, the year of avoiding unnecessary risk. Le Mans circuit, 14 June 1969. Silence reigns. In a matter of seconds, the din will rise from the engines of 45 cars roaring to life. Into this sonic gap, a man strides towards his destiny. Unlike his neighbours, he does not run. He walks to forestall superfluous danger. At the risk of ruining the race for his crew - and for Ford. Jacky Ickx has just said no to unnecessary risk, no to herringbone starts at the 24 Hours of Le Mans, with drivers leaping into their cars without taking the time to properly strap themselves in before launching full throttle into the race. Three years earlier, stuck upside down with a back injury and trapped in the cockpit of his BRM he had just spun around on the first lap of the Belgian Grand Prix, Jackie Stewart felt gasoline gushing over him. A mere spark would have spelled tragedy. From this nightmare moment onwards, the Scottish driver campaigned against dangerous circuits and imposed the first safety standards. In 1969, Jacky Ickx - the GT40 walker - won the 24 Hours of Le Mans, even as Jacky Stewart was crowned victor of the Formula 1 World Championship in his Matra MS80. Text in English and French.

For this 1968 edition, a key season in many respects, contributions were invited from Alain Pernot, an independent journalist and motorsport expert who knows how to share his exhaustive knowledge with all the passion that drives him to collect it. He is the author of several books about Formula 1 and Le Mans. A former driver himself, Manou Zurini is the oldest photographer of automobile racing, and was a fixture on the tracks from the early 1960s, notably as a member of DPPI. Many of his shots were seen all over the world. Today retired from the track, he is a world-renowned sculptor, and shares his deep knowledge of automobile racing in the captions for this book.