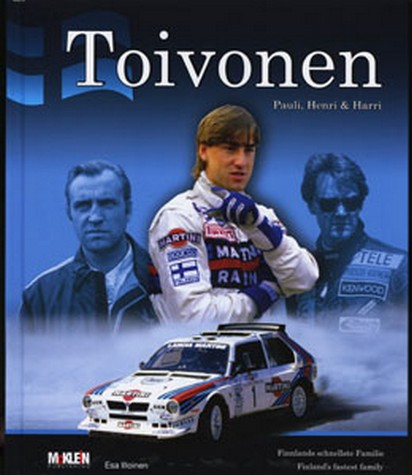 English / German text by E. Illoinen Code: 25993 Format: Hardback / 224 pages Publication date: 01/07/2012 Availability: Sold Out Price: AU $99.95
When rally fans hear the name Toivonen, they immediately think of breathtaking performances and glorious victories. But it is also hard to forget the accident on the 1986 Tour de Corse that took the lives of Henri Toivonen and his co-driver Sergio Cresto and which eventually brought Group B rallying to an end. Henri was one of the most exceptional rally drivers in history. His inspiring performances in the Talbot Sunbeam Lotus, Opel Ascona 400, Porsche 911 SCRS and Lancia Rally 037 are all well-remembered. But it was the Lancia Delta S4 that really showcased Henri's ability with victories in the RAC and Monte Carlo rallies, the latter twenty years after his father's own triumph in the principality. This book tells the fascinating story of the Toivonen family in rallying and racing. It starts with father Pauli's heroic drives in the 1950s and 1960s, including winning the European Rally title of 1968 at the wheel of a Porsche 911. It moves on to include the first exploits of the next generation on frozen lakes right up to the contrasting careers and fortunes of Henri and brother Harri in motor sport. Author Esa Illoinen immersed himself deeply in the Toivonen family history and spoke to innumerable friends and witnesses of those days. Amongst them were with Pauli's widow, Ulla, Henri's widow, Erja, and even Henri's 95-year old English teacher. The result is an intimate and touching portrait of Finland's fastest family, wonderfully illustrated by the best images from the inexhaustible McKlein archive.
Format: Hardback
Pages: 224
Illustration: COLOUR THROUGHOUT
Availability: Sold Out
Publisher: MCKLEIN PUBLISHING (GERMANY)
Publication date: 01/07/2012
Country of publication: UNITED KINGDOM
Weight: 1800 g
Dimensions: 300mm X 245mm
Code: 25993