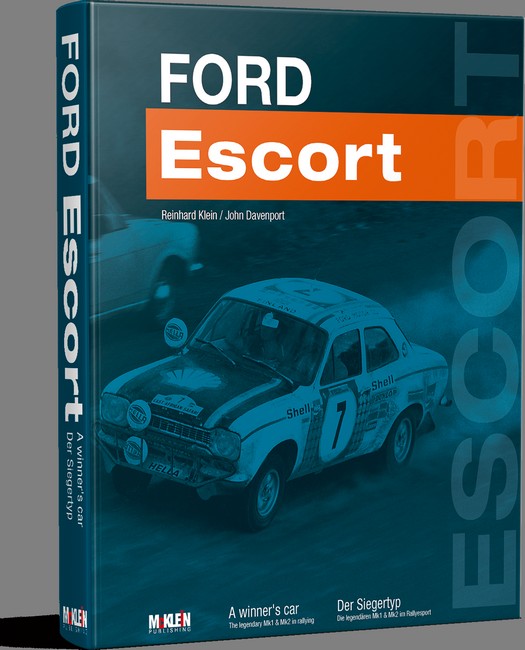 This edition of the book is limited to only 250 numbered copies, contains a hand signature of Hannu Mikkola and comes in a luxuary linen slip case.

The legendary Mk1 & Mk2 in rallying

Asked to sum up the Ford Escort, Markku Alén put it in fourwords: "Its a winners car." The front-engined, rear-wheel drive car triumphed all around the world, whether it was at the 1970 World Cup Rally, the East African Safari, in Swedish snow or on Finlands high-speed tracks. At its home event, the RAC Rally, the Mk1 and Mk2 versions proved invincible for eight years.
But it is not only the successes of works drivers like Roger Clark, Timo Mäkinen, Hannu Mikkola, Ari Vatanen, Markku Alén or Björn Waldegård that have made the Escort so famous. The car was reliable, easy to control and almost easier to repair, and was thus the preferred car of many dozens of successful private drivers. Proof, if any were needed, was that Escorts took the first ten places at the 1973 Scottish Rally. In short, hardly any other car has influenced rallying or enjoyed as much success as the Ford Escort.
This 264-page book summarizes the complete rally history of the Mk1 and Mk2 Escorts from the first concept in 1967 to the World Championship title of 1981. Author John Davenport - the first to co-drive in the Escort at its rally debut fifty years ago - spoke to two dozen contemporary witnesses and has summarized the history of this car more comprehensively and vividly than anyone before. It describes the development in chronological order, but lightened by interesting comments and anecdotes. The texts are accompanied by more than 500 partly known and partly never-before-seen photos. They show the Escort in the legendary Boreham workshop, during test drives and, above all, in action in a wide variety of liveries.