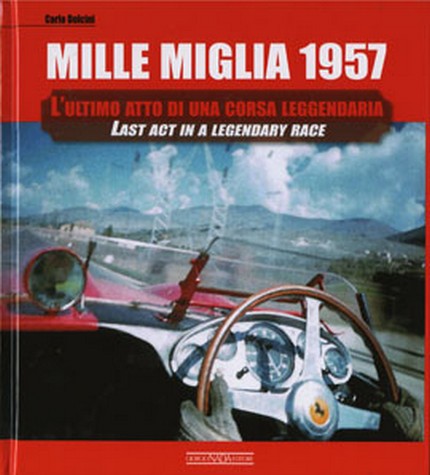 by Carlo Dolcini Code: 24288 Format: Hardback / 144 pages Publication date: 01/07/2011 Availability: Sold Out Price: AU $99.00
Publisher's Notes: 1957: the last Mille Miglia. It was the tragedy of Cavriana, the crash of the Alfonso de Portago-Ed Nelson Ferrari 335S and the 11 bodies on the asphalt that wrote the last page in the story of this fascinating yet dangerous road race. But the 1957 marathon was the most enthralling of them all, enlivened by the contentious battle between the drivers brought together in a single team by Enzo Ferrari and that culminated in victory for Piero Taruffi, who retired from racing after winning the “most beautiful race in the world”. A race the story of which is told mile after mile in this book, using the unfolding news of the Brescia-Rome-Brescia marathon, but also the testimonies of the protagonists, behind the scenes happenings, the cars, the men and women. And extraordinary pictures, many previously unpublished. All against a backdrop of Italy in the late ‘50s and an unforgettable era of motor racing. This is the first in a series of books which will tell the stories of all the post war Mille Miglias over the next few years, ranging from the 1947 race to the tragic 1957.
Format: Hardback
Pages: 144
Illustration: COLOUR THROUGHOUT
Availability: Sold Out
Publisher: GIORGIO NADA EDITORE
Publication date: 01/07/2011
Country of publication: ITALY
Weight: 1154 g
Dimensions: 1mm X 1mm
Code: 24288