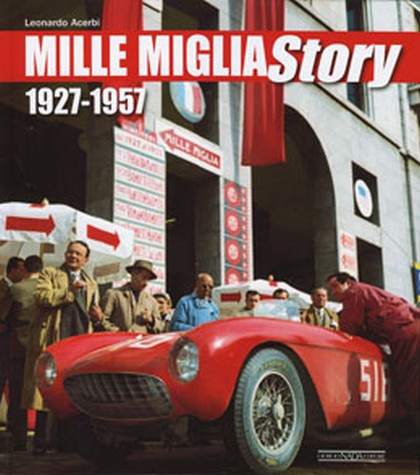 by Leonardo Acerbi Code: 25475 Format: Hardback / 192 pages Publication date: 01/07/2012 Availability: Sold Out Price: AU $69.95
24 editions from 1927 to 1957. 24 races featuring the greatest ever cars and drivers run in the years either side of the Second World War. This in the briefest of terms is the Mille Miglia, the race par excellence; the marathon that for almost three decades traversed Italy, bringing to the nation’s roads stars of the calibre of Varzi, Nuvolari and Caracciola, Biondetti and Fangio, Ascari, Moss and Taruffi driving for the likes of Alfa Romeo, Mercedes-Benz, Lancia and Ferrari. The book draws on a wealth of photographic documents, in particular for the post-war editions, from the Novafoto-Sorlini Archive, an important collection featuring the shots taken by the official race photographer, Alberto Sorlini, between 1947 and 1957. Thanks to this previously unpublished and spectacular material, the book evokes an era in which unforgettable chapters in motorsport history were written.
Format: Hardback
Pages: 192
Illustration: COLOUR THROUGHOUT
Availability: Sold Out
Publisher: GIORGIO NADA EDITORE
Publication date: 01/07/2012
Country of publication: ITALY
Weight: 1236 g
Dimensions: 1mm X 1mm
Code: 25475