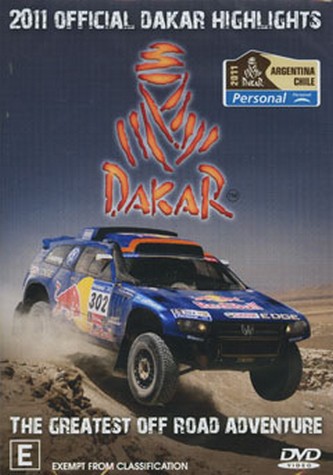 by Chevron Code: 24086 Format: DVD / 90 mins Publication date: 01/07/2011 Availability: Available. Usually dispatched 1-3 business days Price: AU $36.95
Producer's notes: Two years ago political unrest forced the Dakar Rally to migrate from the continental Africa to South America. Shifting this iconic frontier motorsport to Argentina and Chile has seen it take on a whole new flavour - but if anything it's an even tougher challenge than was the former Dakar. As usual the bikes, cars and trucks encountered all manner of different conditions, and like any Dakar in any year there were countless adventures and stories of skill, courage and dogged endurance. It was Volkswagen which took the honours this time with Nasser AI-Attiyah and Timo Gottschalk triumphing in their Race Touareg. The Dakar traverses some of the most spectacular - and also most inaccessible - terrain on the planet. Filming an event like this is a major undertaking; teams of motion picture movie crews and a fleet of aircraft were employed to capture the essence of this amazing event.
Format: DVD
Availability: Available. Usually dispatched 1-3 business days
Publisher: CHEVRON MARKETING SERVICES
Publication date: 01/07/2011
Country of publication: AUSTRALIA
Weight: 86 g
Dimensions: 150mm X 150mm
Code: 24086