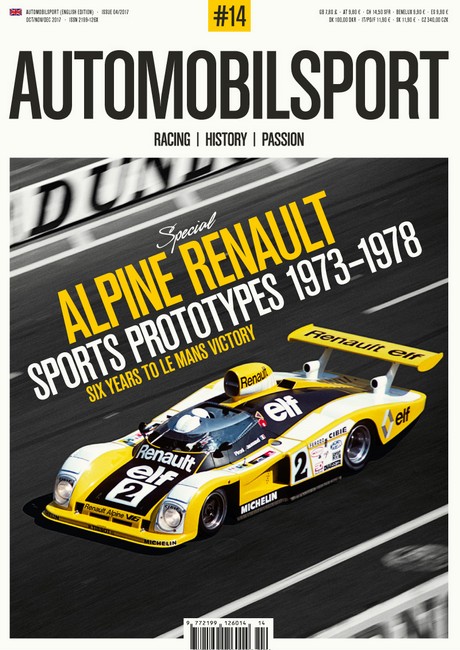 In the 1970s French car maker Renault made a name for itself as a turbo pioneer by kick-starting the turbo era in Formula 1. It was a long and rocky road for the company, the engineers, the race drivers, and everyone else involved. And it all started in sports car racing with a new two-litre non-turbo engine.

In 1970 the state-owned French oil company Elf had a problem. Since its foundation in 1967, marketing boss Francois Guiter had worked hard to give the company and its products a sense of peak technical quality and innovation. According to market research, the best way to spread that message to the man on the street was through success on the race track.

So Elf teamed up with racing and sports car manufacturer Matra, and to great effect. The 1967 season saw Henri Pescarolo win the French Formula 3 championship in a blue Elf-backed car. A year later Jean-Pierre Beltoise won the European Formula 2 championship. And a year after that Jackie Stewart was Formula 1 world champion. Matra was also active in the sports car scene with its first, unfortunately unsuccessful, start at Le Mans. The good times at La Sarthe were yet to arrive.

Looking for a new partner

When Matra joined forces with Simca, however, the Elf deal came to an end. Simca, part of the Chrysler Group, was already tied to Shell.

That meant Elf was on the look for a new partner, and the brand felt that Renault was the logical choice. There had already been a contract between the two since 1968 that meant all of the production road cars were lubricated by Elf when they left the factory. The only issue was that Renault wasn’t sure about engaging itself in motorsport.

So Elf teamed up with Alpine instead. With the Elf backing the small company from Dieppe built a brandnew Formula 3 chassis powered by a Renault 16 engine tuned by Alpine engine specialist Bernand Dudot. The Alpine-Renault was immediately successful, with Patrick Depailler and Jean-Pierre Jabouille dominating the 1971 French F3 championship. Depailler won the title ahead of his countryman, before securing the F3 Grand Prix at Monaco in 1972 – six years before he’d take his first F1 victory at the same circuit in an Elf-sponsored Tyrrell.

In 1972 Elf took the step into Formula 2, right as it became a two-litre category. However, Renault didn’t have a suitable base engine. Having invested so much money in a successful Formula 3 programme, Guiter was determined to make the step up, with or without Renault. So he ordered an F2 chassis from Alpine, and when the Renault board found out where the engine was coming from, they had to take a deep breath – the André de Cortanze-designed car was powered by a Ford BDA engine from British engine maker Brian Hart. Known as ‘Elf2’, it was run by John Coomb’s team in England.

There was no major success in the first year, a second for Depailler at Enna the highlight. In 1973 Francois Cevert took the first win for Elf Coombs Racing, while Depailler finished third in the European F2 championship behind Jean-Pierre Jarier and Jochen Mass thanks to a win at the Eifel race (as the best B driver behind two A drivers) and four second places…

To coincide with the revival of Formula 2, AUTOMOBILSPORT takes a detailed look back at the early days of the famous category. The European Formula 2 Championship, introduced in 1967, was intended as the final stage of development for Formula 1 drivers, and it’s where Grand Prix winners like Jochen Rindt, Jacky Ickx, François Cevert, and Clay Regazzoni started to make their names on the international stage. It was also a category that attracted established stars for cameo performances, chasing appearance money and win bonuses. Among them was two-time world champion Jim Clark, who was tragically killed during a Formula 2 race at Hockenheim.

What wild years they were, when Formula 1 world champions and other Grand Prix greats took on up-and-coming young drivers on second-tier race tracks from Albi to Zolder. The youngsters were looking for a break into the top-level, the Grand Prix stars were there for the starting money. And all of them were racing for the sheer fun of it as well. These were the best years of Formula 2, motorsport’s second division.

When the Formula 1 moniker was introduced to Grand Prix racing in 1948, the logical name for the smaller category was Formula 2. Between a number of regulation changes in the post-war years, the category didn’t exist for a short while before being reintroduced in 1964. This time it was for tuned one-litre engines, which was perfect for Mike Costin and Keith Duckworth. Their first ‘Cosworth’ was based on the Ford 105E engine and produced 135 horsepower at 10,000 rpm. It set the standard in Formula 2 until Honda began its exclusive supply of Jack Brabham’s team with its four-valve 994 cc engine, capable of 150 horsepower at 11,000 rpm. The Honda engine took 12 wins from 13 starts, 10 for ‘Black Jack’ and two for Denny Hulme. It wasn’t until the 13th and final race of the season at Brands Hatch that Brabham was finally beaten, by Jochen Rindt in a Brabham-Cosworth BT18.

Jochen was one of Brabham’s first customers, buying an F2-spec BT10 for £4,000 at the Racing Car Show in London in January 1964. That was about the same as the cost of a new Porsche 911. The legend goes that Rindt, using all his substantial wit and charm, talked a female Cosworth employee into giving him one of the best customer engines. Four months and four races after the deal, he took his first win at Crystal Palace, beating the likes of Graham Hill and Jim Clark: ‘They put their trousers on one leg at a time, too...’ Relative parity was the beauty of Formula 2, even if there were differences in chassis and engine performance. And compared to Formula 1, the sprint race format meant less investment in tyres and fuel, not to mention being much physically easier on the driver. Put simply, a Formula 2 car was a world of fun, constantly drifting and sliding – a dream.

Formula 2 was a perfect fit with the swinging sixties in London. People were starting to relax, and while motorsport had always been cool, it now became a lifestyle. In 1967 the ‘fun formula’ was given a boost with new F2 regulations that allowed 1,600 cc engines based on a block manufactured to at least 500 units. Costin and Duckworth had their four-valve Type A engine – FVA in short – in the works, a fuel-injected engine capable of producing 240 horsepower. Then Walter Hayes, the new head of PR for Ford in England, came knocking; Colin Chapman’s Lotus squad needed a three-litre engine to meet the new Formula 1 regulations. ‘Sure, we’ll just double the size of the Formula 2 engine,’ said Costin. From the FVA, the legendary DFV was born. Hayes gave Cosworth £100,000 and thereby laid the foundation for first and second division Formula racing for many years to come. For £7,500 teams could get a competitive off-the-shelf V8 engine; the smaller F2 unit cost £2,500. Like its bigger brother, the Cosworth FVA was the engine to have right up until the regulations changed again in 1971…

ENGLISHMAN IN THE SILVER ARROW ...

It was 80 years ago that Mercedes-Benz celebrated the debut of the W 125. The 600-horsepower Grand Prix racer was built to put the Stuttgart manufacturer back on the path to success, after losing the European Championship to Auto Union in 1936. A young British driver arrived in Stuttgart at the same time as the W 125 – Richard John ‘Dick’ Seaman.

At the time the 24-year-old was considered to be England’s best driver, a point he proved by winning the 1936 Donington Grand Prix alongside Hans Ruesch in an Alfa Romeo Tipo 8C-35. The Briton completed 120 laps in the 330-horsepower car, although the Mercedes-Benz and Auto Union teams had opted not to compete as it wasn’t a European Championship round. Still, word of the 6-foot-3 driver had already reached Mercedes racing director Alfred Neubauer.

Seaman was invited to a driver trial at the Nürburgring. A second invite came for Monza, where Seaman again impressed Neubauer with his calm, steady driving style. He signed a preliminary contract – something that upset his mother when he returned home in December. She had been financially supporting her son’s career and was worried about the political implications of being involved with the Germans. She urged him to consult with his acquaintances at the RAC and his friend Earl Howe. They all advised him, however, that a seat in what was probably the best racing car in the world was more important than worrying about being lumped together with the National Socialists.

But who exactly was this Dick Seaman, virtually unknown in Germany at the time? Born on 4 February 1913 in Aldingbourne, Seaman came from a wealthy family and studied at Cambridge. His first car was a Riley, but for his first races he used an old MG Magnette that he acquired from Whitney Straight. He opted to end his studies in order to focus on motorsport and made a name for himself with victory at the Swiss Grand Prix in 1934.

In 1935 he wanted an ERA B-Type, which his mother ultimately paid for after a long dispute. However, he was left so disappointed that he didn’t want to race an ERA again after that season; first the company couldn’t deliver the car, and then it proved to be hugely unreliable and spare parts supply equally poor. There was still a big breakthrough in 1935, with Seaman forming a small team based at the Kensington Mews Garage. There he began to work with former Alfa mechanic Giulio Ramponi, who prepared the ERA well enough for Seaman to take some outright wins. He won the Voiturette races in Pescara, Bern, and Brno. For the following season Ramponi managed to make the 10-year-old Delage 15 S8 that Seaman bought from Howe competitive. The Briton won the Voiturette races at Pescara, Bern (for a third time in a row), and Donington in a car that had won the world championship back in 1927.

Signing the preliminary contract was followed by several months of waiting, as the National Socialist party agreed to the hiring of a foreign driver. In February 1937 consent was finally given, and Seaman was able to join his teammates Rudolf Caracciola, Manfred von Brauchitsch, and Hermann Lang for the annual spring test at Monza. There, he sat in a Silver Arrow for the first time. As the W 125 was only freshly-completed, the newcomer started the test out in a W 25 from the previous year. Still, it was more than twice as powerful as his Delage, making around 450 horsepower. And that wasn’t easy to manage, Seaman getting on the gas too early on the exit of a corner and hitting a tree. His Mercedes was badly damaged, the engine parting company with the chassis. With a broken kneecap and a few cuts and bruises, Seaman got away very lightly…

ALSO IN THIS ISSUE