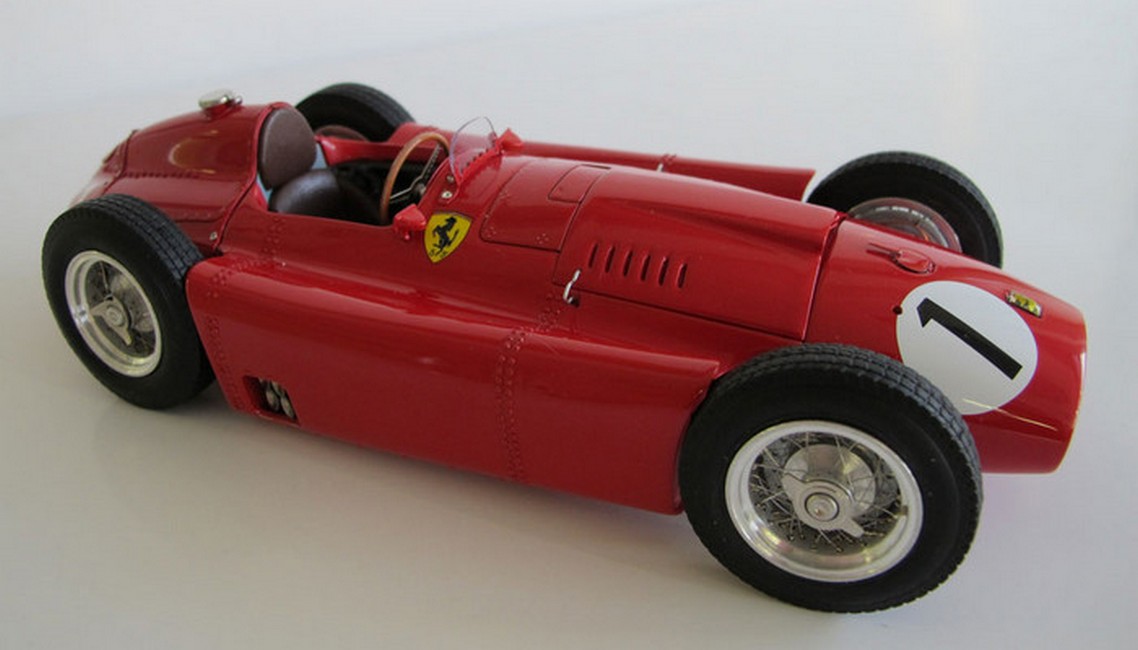 It was July 1, 1956. Crowds of spectators were coming to attend the sixth race of the 1956 World Cup at the Silverstone Circuit. The race would consist of 101 laps of the circuit here, covering a distance of 475.76 km.

Ferrari and Maserati were two top players of the game, and each would send four entrants to the race. From Ferrari, it was Juan Manuel Fnagio Alfonso de Portago, Eugenio Castellotti, and Peter Collins -- an English young driver already with two wins to his credit.  All the Ferrari D50s were of the short-nose type, and the bow of Fangios car was painted with a black start-ing number 1 on a white base circle.

Maserati used its regular drivers Stirling Moss, Jean Behra, Cesare Perdisa and Paco Godia. Another game player was Vanwall, a British racing team that was composed of Maurice Trin-tignant, Harry Schell and José Froilán Gonzaléz. After a long absence from the race, B.R.M. (British Racinng Motors) pinned its hopes on Mike Hawthorn, Tony Brooks and Ron Flockhart. Of course, the local team Connaught, which comprised Archie Scott-Brown, Desmond Tit-terington and Jack Fairman, was a fixture of the race, too.  Then there was the the French racing team Gordini with two cars, which were to be driven by Hernando da Silva Ramos and Robert Manzon respectively.

Also present on the start-off field were private drivers. Among them was Jack Barbham and six other drivers, who would race in their private Maserati 250Fs. Altogether, there were 28 contestants this year, and only González from the Vanwall team had previously won at this race event. The race turned out to have a high failure rate. In the end, no more than 11 con-testants crossed the finish line.

During the practice, Fangio and Moss had fought for the best starting position. It was Moss who eventually got pole position -- the only time that Moss managed to do so for his Maserati 250F during the 1956 Formula One season. Fangio was the next to start off. He was followed by Mike Hawthorn, Collins, and two Vanwall drivers Schell and González in that order.

Fangio had a good start, but an early spin caused him to drop back. On lap 16, Moss was in the lead, and Hawthorn was close on his heels until technical problems forced the B.R.M pilot out on lap 24. Moss was now leading the field ahead of Salvadori in a private Maserati, and Fangio was in the third place.
.
Then Moss had to stop for a refill of engine oil, which cost him some valuable time, and he scrambled to make up for it when he was back on the track. On lap 63, Collins had to retire with a serious technical problem in his car, but he resumed racing in Portago’s car. On lap 69, Fangio took the lead. Shortly before the end of the race, Moss encountered problems again -- with a broken axle, which put him ut of the game.

After all the dust had settled down, Fangio won at Siolverstone for the first time in his career. His teammate Collins finished second, thus securing a Ferrari double victory. Nevertheless, Collins had to share the points of this 2nd place finish with Portago, which cost him a lot of lead in the drivers‘ standings.