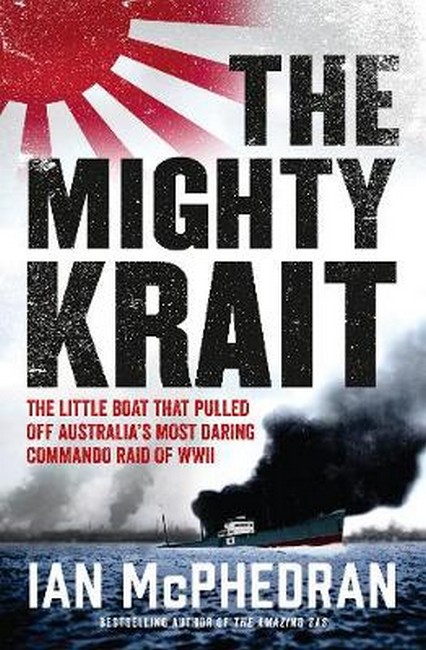 The Mighty Krait: The little boat that pulled of Australia's

most daring commando raid of WW2 by McPhedran, Ian Code: 56690 Format: Paperback / 256 pages Publication date: 06/05/2019 Availability: Available. Usually dispatched 1-3 business days Price: AU $35.00
The little boat with a big past: the fight to save one of the most important artefacts of Australian military history. For many years, thousands of people have walked past an unassuming black timber fishing boat bobbing in the water down at the wharves of Sydney's Darling Harbour. But appearances can be deceptive. This humble little trawler played a key role in one of World War II's most audacious and successful commando raids. In September 1943, fourteen young Z special operatives sailed the small fishing boat from Australia to Japanese-occupied Singapore. Battling deadly tides, fierce storms, hostile ships and detection from the air, this little ship and its courageous young crew made it to the heart of the enemy stronghold to make a daring raid that destroyed 30,000 tonnes of enemy shipping. Operation Jaywick still rates as one of the greatest Special Forces operations of all time. But its story doesn't end there. Neglected and left to rot for years, it has taken a mighty and concerted effort by a dedicated few to save and restore the little ship with a big past and display it as a permanent memorial to Australian Special Forces. The Mighty Krait is a compelling, uplifting and unforgettable story of Australian military history - and the importance of reminding all Australians of the courage and service of our armed forces.
Format: Paperback
Pages: 256
Availability: Available. Usually dispatched 1-3 business days
Publisher: HARPER COLLINS PUBLISHERS
Publication date: 06/05/2019
Country of publication: AUSTRALIA
Weight: 390 g
Dimensions: 235mm X 154mm
Code: 56690