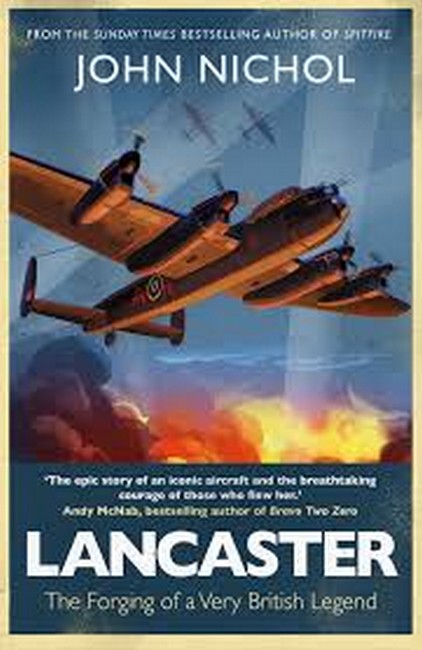 The Making of a Very British Legend by Nichol, John Code: 58956 Format: Paperback / 400 pages Publication date: 10/06/2020 Availability: Available. Usually dispatched 1-3 business days Price: AU $32.99
Praise for Spitfire: A Very British Love Story 'The best book you will ever read about Britain's greatest warplane.' Patrick Bishop author of Fighter Boys 'As the RAF marks its centenary, Nichol has created a thrilling and often moving tribute to some of its greatest heroes.' Mail on Sunday 'A stirring portrait of a piece of aviation art in motion flown by the bravest of the brave. Nichol's Spitfire is still a sky-borne prima ballerina that kicks like Bruce Lee.' RAF News 'A superb journey through the remarkable tale of that British icon, the Spitfire. Brilliantly and engagingly written . . . Truly stunning.' Andy Saunders, aviation historian 'A rich and heartfelt tribute to this most iconic British machine. Focusing on the men (and women) who flew the Spitfire, John Nichol has brought a fresh and powerful perspective to the story. By recording their bravery, humility, camaraderie, tragedy and sheer joy in flying their beloved Spits he has done them, and us, a valuable service.' Rowland White, author of Vulcan 607 'A superb and compelling book. Brilliantly written with some incredible and astonishing stories; it is gripping, moving, emotional and sometimes humorous - just perfect.' Squadron Leader (Ret) Clive Rowley, former Officer Commanding RAF Battle Of Britain Memorial Flight 'There are not many of us left, most of us who survive are over 95 and this is a story of young men. We were the cutting edge of the 'Shining Sword' that Bomber Harris dubbed the Lancaster. We survived the Bomber Offensive in which 55,573 - almost half - of our friends and colleagues gave their lives to stop Hitler ruling the world. We are now a whole generation older than the young men and women who serve today and in a few years we will all be gone. Historians will then be able to throw around their insouciant opinions about what we did with no contradiction by those who were there. When we are gone our stories of flying and fighting the Lancaster should not die with us. We are the last witnesses to the legend of the Lancaster and those who fought and died within its metal body.' - Air Chief Marshal Sir Michael Beetham After its maiden flight on 5th January 1941, Lancaster chief test pilot Sam Browne said, 'Oh boy, oh boy. What an aircraft!' With a maximum weight of over thirty tons, far heavier than the RAF's previous generation of bomber, the standard version could lift, on average, 14,000lbs of bombs. Britain was ready to take the aerial war to Nazi Germany in a deadly fashion. During the course of the Second World War, 7,377 Lancaster bombers were built, flying a total of 156,000 sorties and dropped 618,378 tonnes of bombs on German cities such as Cologne, Hamburg, Berlin, and, of course, Dresden. Only thirty-five Lancasters completed more than 100 operations, and 3,249 were lost in action. The most successful, which completed 139 operations, was sent for scrap in 1947. One seventh of all deaths suffered by the British during WWII were incurred by Bomber Command. Over 50,000 aircrew were lost over the skies of Europe. Now, John Nichol, Gulf War veteran, ex-POW in Iraq and Sunday Times bestselling author of Spitfire: A Very British Love Story reveals the true cost of flying this iconic and deadly airplane - through the few authentic voices of the RAF veterans who are left to us.
Format: Paperback
Pages: 400
Illustration: COLOUR SECTION(S)
Availability: Available. Usually dispatched 1-3 business days
Publisher: SIMON & SCHUSTER LTD
Publication date: 10/06/2020
Country of publication: UNITED KINGDOM
Weight: 0 g
Dimensions: 5944mm X 3886mm
Code: 58956