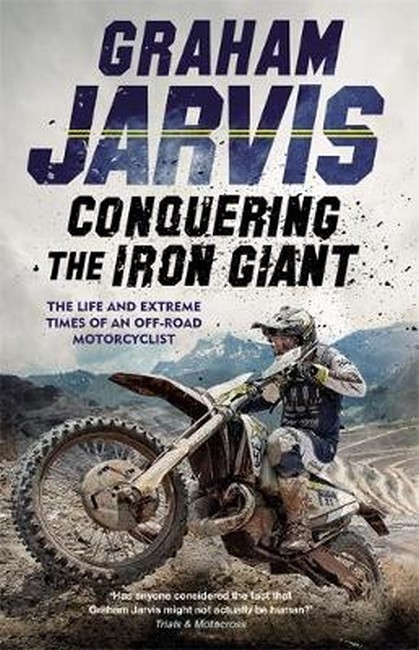 Graham Jarvis has been at the top of off-road motorcycling for the best part of twenty-five years and has competed in hundreds of competitions and races all over the world, from TVs Junior Kickstart in the early 1990s to the fabled and ridiculously perilous Erzberg Rodeo, which Graham has won a record-equalling five times and is one of motorsports most feared events.

Having excelled at Trials and Enduro, Graham then moved into the high-octane world of Hard Enduro, one of the most exhilarating sports on two wheels. Since then, he has all but dominated the sport and has won Hard Enduros five major events - the Erzberg Rodeo, the Red Bull Sea to Sky, the Red Bull Romaniacs, the Tough One and Hells Gate - on no fewer than thirty occasions, making him one of motorsports most successful athletes.

In Conquering the Iron Giant, Graham will take us from his early years in Canterbury, where he started pulling wheelies from the age of four on a bike that his dad had rescued from the tip, to competing against up to 1,800 riders in races where dozens are often airlifted to hospital, and only three or four finish . . . with Graham usually at the head of the field. It is a story of dedication, skill and, above all, an extreme passion for off-road motorcycling.

GRAHAM JARVIS won Junior Kickstart a record three times before turning professional in 1993. He went on to flourish as a Trials rider, winning the British Championship five times and the legendary Scott Trial nine times, more than any other rider, as well as the punishing Scottish Six Days Trial five times. In 2006 Graham was invited to compete in an Enduro race and found this suited him even more than Trials. Two years later, in 2008, he moved over to the newly formed Extreme Enduro and soon realised that hed found his true calling. Since going on to dominate the sport, Graham has become the most followed off-road motorcyclist in the world, and even at the ripe old age of 43 he continues to wow his fans and confound his competitors. Graham lives in Ripon, North Yorkshire.