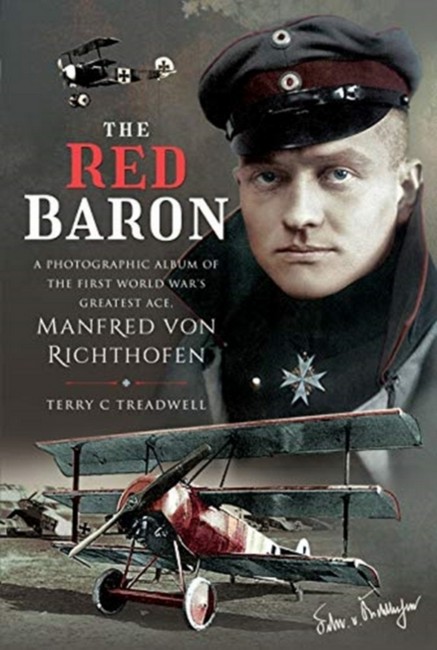 A Photographic Album of the First World War's Greatest Ace by Treadwell, Terry C Code: 60640 Format: Hardback / 256 pages Publication date: 12/04/2021 Availability: Available. Usually dispatched from UK 1-2 business days Price: AU $43.98
If one aircraft was to represent the First World War, it could be the distinctive red Fokker Triplane of Manfred von Richthofen. With an astonishing eighty aerial victories, the Red Baron became a legend in his own, short, lifetime. Regarded as one of the most widely known fighter pilots of all time, von Richthofen is also considered to be the First World War's 'ace-of-aces'. While much is known about this German aristocrat, what this book accomplishes is a pictorial portrait of von Richthofen as has never been seen before. Through a unique collection of photographs, the life of this famous airman is laid bare. From early family photographs through to the First World War, and his initial service as a cavalry reconnaissance officer on both the Eastern and Western fronts, his flying career, and the aircraft he flew, this extensive collection provides an unrivalled window into the life of history's most celebrated fighter pilot. By 1918, von Richthofen was regarded as a national hero in Germany and respected by his enemies. However, his remarkable career came to an abrupt conclusion on 21 April 1918\. Just as the German Spring Offensive was faltering, von Richthofen's aerial armada took to the sky to engage the Sopwith Camels of 209 Squadron which had taken off to undertake an offensive patrol over the Somme. In the ensuing dogfight, von Richtofen pursued one of the Camels along the valley of the River Somme. As he crossed the Allied line he came under fire - both from the ground and from the air. Von Richtofen was fatally wounded by a single bullet which damaged his heart and lungs. Just which Allied pilot, or indeed soldier, fired the fatal shot remains in contention. Images of the stripped wreckage of his famous Fokker Triplane add a solemn, and all too graphic, coda to the life of the Red Baron. AUTHOR: Terry C. Treadwell was born and educated in Bournemouth. Having served in the Royal Air Force, in telecommunications, and travelled the world quite extensively, including working in Australia for a short period, he was European Correspondent for Naval Aviation News (the official aviation magazine for the US Navy) and Wings of Gold (US) for ten years. 200 b/w illustrations
Format: Hardback
Pages: 256
Illustration: B&W THROUGHOUT
Availability: Available. Usually dispatched from UK 1-2 business days
Publisher:
Publication date: 12/04/2021
Country of publication: UNITED KINGDOM
Weight: 0 g
Dimensions: 234.00mm X 156.00mm
Code: 60640