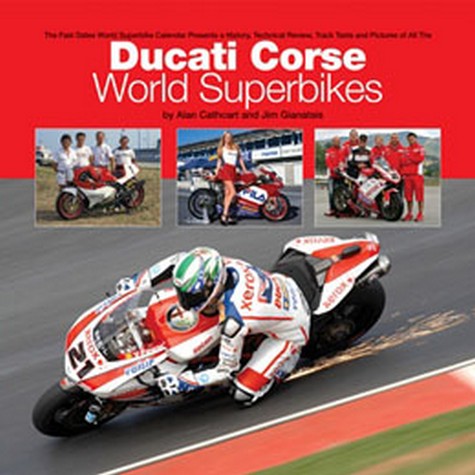 by Alan Cathcart Code: 25971 Format: Hardback / 224 pages Publication date: 01/07/2012 Availability: Sold Out Price: AU $108.99
NOTE: We have currently sold out of this book and are expecting more stock from supplier. The year 2011 marked the 25th anniversary of the creation of the first, of a now legendary line of Ducati Superbikes with their trademark Desmoquattro 4-valve V-twin motors hung below a lightweight trellis tube frame, racebikes that went on to dominate the then new World Superbike Championship for next quarter of a century. Arguably the most significant motorcycle engine design of any kind since the CB750 Honda, and surely the most remarkable and successful volume production engine format ever used in world competition by any single manufacturer, the venerable Ducati 4-valve desmodromic engine recorded to this date 14 World Superbike Championship titles in the 24 year history of the world's premier production bike based world roadracing series. A page was also turned in motorcycle history in November 2011, with the debut at the EICMA Motorcycle Show in Milan, Italy, of the exciting new Ducati 1199 Panigale Superbike powered by the Italian company's all-new Superquadro ultra short-stroke motor. A motor which beyond its overall 90-degree V-twin desmo architecture, owed nothing to previous Ducati Superbike engine designs except the promise of continuing a winning tradition. Moreover, this Superquadro was fitted in a minimalist monocoque chassis design representing an important departure from previous Ducati V-twin motorcycles, which have all employed the company's trademark tubular steel trellis frame. This book chronicles the development and history all five Ducati Corse World Superbike generations together with interviews with the designers, racers and team managers. This unique insight is provided by renown motorcycle racer and journalist Alan Cathcart who has had the envious and often exclusive opportunity to test ride every one of the factory Corse race bikes over the last 25 years, those tests of which are featured here. Photography of the Corse factory bikes and riders is proved by the world's most renown motorcycle roadracing photographers. Adding icing to the cake, and to warrant this big collectors edition book, included are the incredible high definition photographs of the bikes taken by former racer, motojournalist and photographer Jim Gianatsis as featured in the Fast Dates World Superbike Calendars from those years with the beautiful Fast Dates Calendar Kittens who served as the official SBK and Team Ducati Corse grid girls at the race where the bikes were photographed.
Format: Hardback
Pages: 224
Availability: Sold Out
Publisher: GIANATSIS DESIGN ASSOCIATES
Publication date: 01/07/2012
Country of publication: UNITED KINGDOM
Weight: 1704 g
Dimensions: 150mm X 150mm
Code: 25971