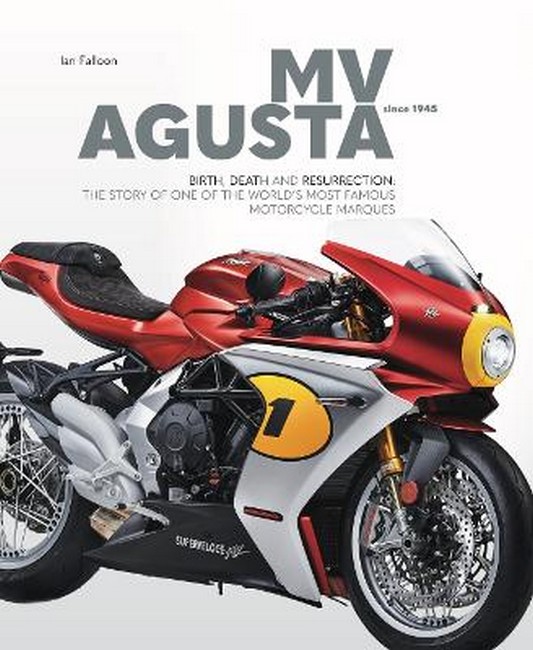 With 75 World Championships (riders and manufacturers), 270 Grand Prix victories, and more than 3000 International race wins, MV Agustas competition record is unequalled amongst Italian motorcycle manufacturers. MVs list of World Champions includes some of the greatest names in the sport, with Carlo Ubbiali, John Surtees, Mike Hailwood, Giacomo Agostini and Phil Read winning multiple times. Alongside the magnificent racing bikes MV produced a wide range of street models, including the exotic four-cylinder bikes based on the Grand Prix racers of the 1950s and early 1960s. After closing in 1977 MV Agusta was resurrected by Cagiva in 1997 and released the Massimo Tamburini-designed four-cylinder F4. Initially 750cc, this evolved into 1000cc and the Brutale series. In 2012 the three-cylinder F3 joined the F4 and a large range of models has grown from these two platforms. With a 50 year passion for Italian motorcycles, Ian Falloon tells the full story of MV Agusta, covering all the street and racing models from 1945.

Ian Falloon was born in New Zealand in 1952 and studied engineering and music at Victoria University, Wellington. After a career as a symphony orchestra oboist was brought to an end by a motorcycle accident he began writing articles on motorcycles for magazines. His first book, the Ducati Story, has run to several editions and has been published in three languages. The success of the Ducati Story led to a series of Ducati books and histories of Honda, Kawasaki, BMW, and Moto Guzzi motorcycles. He has now written many books on motorcycles, mostly historical but also restoration guides. With an interest and passion spanning decades he now concentrates on collecting and restoring older Italian motorcycles, particularly Ducati, MV Agusta, Laverda, and Moto Guzzi. Ian Falloon lives in Australia, and is ably supported in his projects by his wife Miriam and sons Ben and Tim.