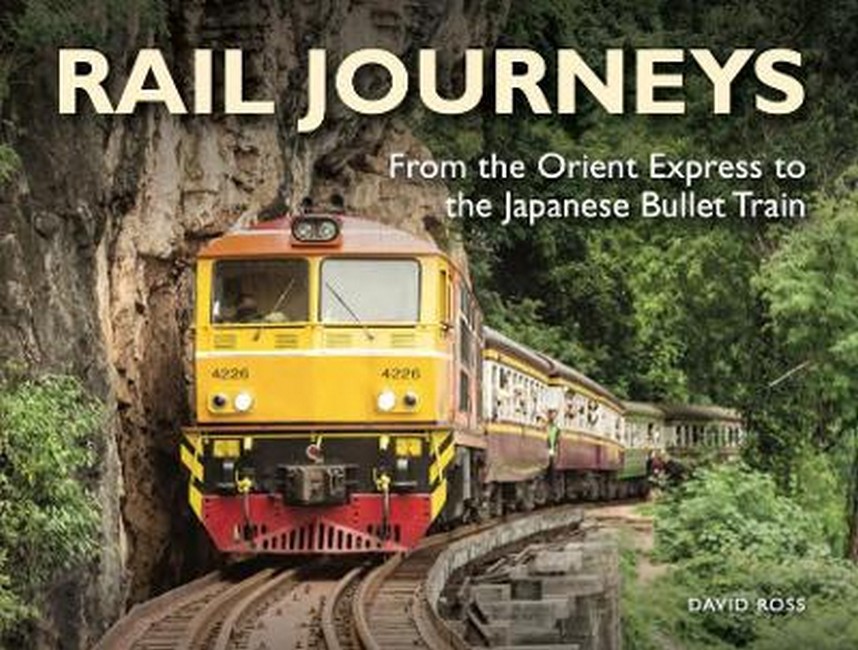 From the Orient Express to the Japanese Bullet train by Ross, David Code: 61515 Format: Paperback / 224 pages Publication date: 14/04/2022 Availability: In stock at supplier. Usually dispatched 7-15 business days Price: AU $21.98
There is always a sense of adventure when going on a railway journey. Whether it is aboard the Orient Express from London to Istanbul, or travelling the Transcontinental railroad through the Canadian Rockies to the Pacific coast, or riding the Serra Verde Express through the Brazilian rainforest, Rail Journeys takes the reader on a journey through some of the most unusual, romantic and remarkable landscapes in the world. Find out about the Coast Starlight, which carries passengers from Los Angeles along the Pacific coast to Seattle and all points in between; or the 7,000 kilometre Trans-Siberian, crossing the entirety of Mongolia and Russia from Beijing to Moscow; or 'El Chepe', the Mexican Copper Canyon railway, a line which took 90 years to build and negotiates 87 tunnels, 36 bridges and sweeping hairpin bends as it climbs from sea level to the rim-top views it offers at 2,400m; or enjoy the engineering excellence of the Konkan Railway in India, connecting Mumbai with the port of Mangalore via some 2,000 bridges and 90 tunnels; or experience the Shinkansen 'Bullet Train' as it races at speeds of more than 300 km/h between Tokyo and Kyoto, passing the iconic Mount Fuji on the way. With 210 outstanding colour photographs, Rail Journeys takes the reader to some of the most historic, spectacular and remotest locations in the world, places where trains still offer romantic and astounding experiences of rail travel at its best.
Format: Paperback
Pages: 224
Illustration: B&W THROUGHOUT
Availability: In stock at supplier. Usually dispatched 7-15 business days
Publisher: AMBER BOOKS LTD
Publication date: 14/04/2022
Country of publication: UNITED KINGDOM
Weight: 350 g
Dimensions: 124.00mm X 163.00mm
Code: 61515

Introduction America * Mount Washington Cog Railway, New Hampshire, USA - dating from 1868, this was the world's first mountain-climbing cog railway (rack-and-pinion railway) * Rocky Mountaineer, Canada - connects Calgary and Vancouver, offering spectacular views of the Canadian Rockies * Grand Alaska Railroad, Alaska, USA - Meanders through the beauty of Alaska, past dramatic icebergs, glaciers and snow-capped mountains, from Fairbanks to Anchorage. * Expreso del Sur, Bolivia - Crosses the "white desert" of Bolivia from Oruro to Villazon. * Guayaquil & Quito Railway, Ecuador - Running through Ecuador's Andes, this train travels through cloud forests, tropical coastal landscapes, vertiginous mountains and passes the "Avenue of Volcanoes" before descending to sea level. * Aguas Calientes, Peru - Named for the "discoverer" of Machu Picchu, the "Hiram Bingham" is the luxury service on the Cuzco-Macchu route, with Pullman-style passenger cars and dining facilities.. * La Trochita/Old Patagonia Express, Argentina - Described by Paul Theroux as "the railway almost at the end of the world", this narrow-gauge steam locomotive runs for 300 miles from the foothills of the Andes to the Atlantic coast. * Serra Verde Express, Brazil - Runs through deepest rainforest in southeast Brazil * Copper Canyon railway/El Chepe, Mexico - Running from Chihuahua to Los Mochis, the famous El Chepe train runs through the Copper Canyon's many gorges. Europe * Fla m Railway, Norway - Considered to be Norway's most scenic railway, the Fla m line descends from a junction with the Oslo-Bergen railway to Fla m, at the inner end of Aurlandsfjord, descending 863 metres (2848ft) in just over 20km (12.5 miles), past waterfalls, gorges and dramatic mountain vistas. * Orient Express - Glamorous and rich in history, this old-world luxury long- distance passenger train was created in 1883 to carry passengers from Paris to Istanbul. * Snowdon Mountain Railway, Wales - Since 1896, trains have trundled up and down the highest mountain in England and Wales (1085m/3560ft) on this rack- and-pinion worked railway. * West Highland Line, Scotland - known as Rathad Iarainn nan Eilean (gaelic for "Iron Road to the Isles"), the line links the ports of Mallaig and Oban in the Scottish Highlands to Glasgow in Central Scotland * Cinque Terre Express, between Levanto and La Spezia, Italy * Central Rhine Railway between Bingen and Koblenz, Germany - meanders along the west bank of the River Rhine, showcasing the calm water and vineyard-laden slopes of the valleys * Scho nbrunn Metro Station, Vienna - Vienna has one of the most highly integrated and efficient urban transport systems in the world. This is the station for Scho nbrunn Palace, built as part of a suburban railway scheme in 1898, and since 1964 a stopping-point on Metro line U4. * Zermatt-Gornergrat Railway, Switzerland - Breathtaking views of the Matterhorn are had from the train on the 33-minute journey between Zermatt and the Gornergrat terminus at 3089m (10,134 ft). * Belgrade, Serbia to Bar, Montenegro - travelling from the Serbian capital to the seaside town, the mountains and canyons of southwest Serbia and the north of Montenegro provide a jaw-dropping backdrop * Novosibirsk-Glavny Station, Siberia, Russia - Novosibirsk is the largest station on the Trans-Siberian Railway. Opened at the foundation of the city in 1894, the present buildings date from 1939 and were renovated in 1999. * Trans-Siberian Railway, Russia to China - With a length of 9,289 kilometres (5,772 miles), from Moscow to Vladivostok, it is the longest railway line in the world. There are connecting branch lines into Mongolia, China and North Korea Africa * Marrakech Express, Morocco - overnight journey from Tangier to Marrakech * Tangier to Casablanca - first high-speed line in Morocco and Africa * Nairobi to Mombasa, Kenya - new Chinese-built standard-gauge railway has reduced the journey time from a putative 16-24 hours by the old narrow-gauge line to just over four hours by the Intercity Train * Bulawayo to Victoria Falls, Zimbabwe - travels through spectacular game country and national parks to one of the great wonders of the African continent * Cairo to Luxor, Egypt - a train that hugs closely to the Nile river, running past great temples, pyramids and the fertile Nile Valley * Umgeni Steam Railway, South Africa - The Durban to Pietermaritzburg line was built in the 1880s; it runs through a 53 metres (174 ft) long tunnel at Drummond built in 1878, which is probably the oldest tunnel in use today in South Africa * Dakar Station, Senegal - The railway between Dakar and St Louis was the first in French West Africa, opened in 1885. Asia * Jungle Train, Malaysia - The 300-mile (480km) Jungle Train was built by the British to harvest Malaysia's tin, rubber and tea. It still weaves through defunct mines, rubber estates and vast tea plantations. * Darjeeling Himalayan Railway, West Bengal, India - The entire 88km (55-mile) railway, completed in 1881, is a UNESCO World Heritage Site. * Kyoto to Tokyo, Japan - Passengers on the Shinkansen "bullet train" heading for Nagoya and Kyoto from Tokyo prefer to have right-hand seats to see Mount Fuji as the train speeds past at 320km/h (200mph). * Beijing to Shanghai, China - The world's fastest passenger train completes the 819 mile (1,318km) trip in four and a half hours. * 'Train Street', Hanoi, Vietnam - Known to visitors as 'Train Street', this thoroughfare in Hanoi's Old Quarter sees a long-distance train squeeze past twice daily, a popular venue for tourists. It is the train from Hanoi to Ho Chi Minh City, running 1600km (990 miles) on the metre-gauge track between the two cities. * Eastern & Oriental Express - running from Singapore to Bangkok, this luxury train passes through rubber plantations, rainforest, and tropical beaches in connecting the city state with the Thai capital * Alishan Forest Railway, Chiai County, Taiwan - Running for 86 km (53 miles) in Taiwan's mountainous centre, this 762mm (2ft 6in) gauge line was opened in 1912 as a logging railway, bringing hardwood timber down to the coast. * Trans-Australian Railway, Nullarbor Plain - This line has the world's longest straight section of railway, 478km (299 miles) across desert and scrubland.