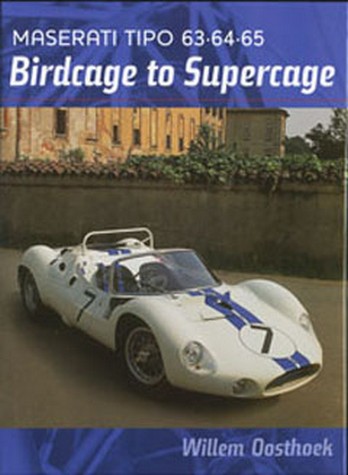 The Complete History of the Rear-Engined Birdcage Maseratis by Willem Oosthoek Code: 14433 Format: Hardback / 344 pages Publication date: 01/07/2004 Availability: Sold Out Price: AU $157.99
The front-engined Tipo 60 and 61 cars were nicknamed Birdcages. When the rear-engined Tipo 63 [with independent rear suspension] was introduced it was also referred to as a Birdcage. However, when the rear-engined Tipo 64 model was shown to the press in the beginning of 1962, its Birdcage frame turned out to be made of even smaller tubes and its rear suspension [a flexible deDion] was also made of a Birdcage structure, sort of a Birdcage within a Birdcage This led the journalists to nickname this very complex-looking car a Supercage. Subtitle: World Championship Rounds, SCCA Nationals, Professional West Coast and Nassau Speedweek Range: Birdcage Maserati competition history from 1959 to 1965. Format: Chapter layout begins with the front-engined Birdcage Maserati competition history from the middle of 1959 until the end of 1960, covering World Championship, professional USAC and Nassau Speedweek racing. From there it progresses into chapters covering the development of the first rear-engined Birdcage Maserati at the end of 1960 and the background of the private team owners who bought the first production cars: Briggs Cunningham, Count Giovanni Volpi and Lucky Casner. From then on each chapter covers a event in which these cars were raced, ranging from the World Championship rounds to the U.S. racing scene as sponsored by SCCA [amateur] and USAC [professional], and including the British Nassau Speedweek at the end of the year. The subject period covered is 1961 to 1965. Each race report includes a complete entry list, complete starting grids and complete results. This is information never published beyond the WSCC events and of great historical value. Coverage: The competition history and technical specifications of all 10 rear-engined Birdcages constructed, as well as their direct competition: Ferrari, Porsche, Aston Martin, Jaguar, Lotus, Cooper, Lister, Scarab, Chaparral, Sting Ray and Old Yaller. Book Size: Designed by Simon Loxley. Vertical format. 95,000 words and approximately 350 historic, never published black & white photographs. Page length 332 + index 6 pages. Chapters: Twenty-nine chapters, appendices and index. Illustrations: Approximately 350 photos of the rear-engined Birdcages, as well as their front-engined predecessors and their European and US competitors. A start photo sequence is included of most races. Most photos were taken in the sixties by top photographers, but there are also photos of the subsequent restorations of the cars in more recent years. Foreword: Written by Jim Sitz, in-house historian of Vintage Motorsport and Road & Track. Jim is one of the foremost experts on international motor racing history. Author and background: Willem Oosthoek is a Dutch born international banker as well as the historian of the U.S. Maserati Club. In this capacity he has published numerous articles in the Maserati magazine Il Tridente, as well as in the following international publications: Vintage Motorsport, Prancing Horse, Motorsport, Der Dreizack and Vintage Racecar Journal. He is a recognized authority on the subject of Birdcage Maseratis and is often consulted by museums and auction houses on this subject. When not involved in motor racing history, he likes to walk his wife's Siberian huskies. Appendices: Complete racing histories by individual chassis number, short-wheelbase versus long wheelbase specs by individual chassis number. Index: Index covers names of all people relevant to the history of the rear-engined Birdcages.
Format: Hardback
Pages: 344
Availability: Sold Out
Publisher: DALTON WATSON FINE BOOKS
Publication date: 01/07/2004
Country of publication: UNITED KINGDOM
Weight: 2375 g
Dimensions: 1mm X 1mm
Code: 14433